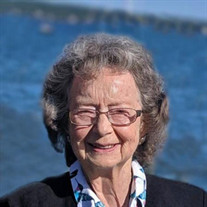 Beatrice Ann (Chadwick) Brown passed away peacefully with family at her side November 24, 2020, in Traverse City, Michigan. Bea was born May 17, 1929 to Clifford and Mary (McLeay) Chadwick. She grew up in Sault Ste. Marie, MI, graduating from Soo High with her future husband in 1947. They attended class reunions together for some 70 years. Out of high school, Bea was recruited by the FBI, and she was off for an adventure in Washington DC. She served the FBI for five years in Washington DC and Detroit. On September 14, 1951, she married her high school sweetheart William R. “Bill” Brown. The couple lived in a tiny house trailer in the Ann Arbor area while she worked and he earned his Juris Doctorate degree from the University of Michigan. They started their family as Bill served in the Air Force, living in the Detroit area. In the mid 1950’s, the Browns moved to Traverse City where Bill became a partner in the law firm Murchie, Calcutt and Brown, and later he was elected Circuit Judge. They raised five children Jill (Fred “Chip”) Trull of North Carolina, Mike (Mary) Brown of Traverse City, Beth (Bob) Woods of Lake Ann, Bob (Dawn) Brown of Traverse City, and Nick Brown who resides in Viet Nam. Bill and Bea were active in Asbury Methodist/ Traverse Bay United Methodist Church, serving on most of the committees over the years. Bea primarily ran the home, but also raised foster children, sold real estate, and managed rental homes. The Browns enjoyed vacations traveling to Florida, Alaska, Canada, Mexico, Hawaii, and especially to the family cabin on Whitefish Bay. They had many happy times walking, boating, water skiing, canoeing, and kayaking around the waters of Myrtle Beach, Mickey Lake, and Long Lake. Upon retirement, they traveled, and volunteered at an orphanage in Florida with their 29’ers group, also volunteering with Habitat for Humanity and Meals on Wheels. Bea was known for her love of children and babies, serving in the church nursery, and acting as mom for the whole west side neighborhood, from homes on Madison, Hill, and Elmwood Ave. Bea is the last of her generation, as she was preceded in death by Bill, her beloved husband of 68 years; her parents Clifford and Mary Chadwick; her brothers Bobby, Bill, and Chuck Chadwick; and son, Mike Brown. Bea’s grandchildren and great grandchildren were her pride and joy: Jessica (Bryan) Halker and their son Samuel; Megan (Pete) Benbow; Ryan Brown; Shawn Brown (Jason Bott) and their children Riley, Evelyn, and Gannon; Christopher (Erica) Woods and their son Hunter; Kelli (Jay) Weber and their girls Grace, Charlotte and Ella; Dillon Brown (Emma Talbot); and Alexa Brown . Bea was close to her many nieces and nephews and had a special relationship with her sister-in-law Helen Marie Chadwick; nephew Andy (Erica) Chadwick and their sons Ethan, Owen, and Carson; niece Holly Chadwick (Mohamed “Haloup” Mashaleh) and their daughter Tala. Bea was known for her warm, generous nature and her deep love for family and friends. She loved a house full of family, children and grandchildren, with laughter and “happy noise.” Arrangements have been made, with the assistance of Reynolds Jonkhoff Funeral Home for a family burial with hopes of a memorial service at a future date. In lieu of flowers, please consider a donation to Anchor of Hope Haiti, PO Box 94, Traverse City, MI 49685.

Beatrice Ann (Chadwick) Brown passed away peacefully with family at her side November 24, 2020, in Traverse City, Michigan. Bea was born May 17, 1929 to Clifford and Mary (McLeay) Chadwick. She grew up in Sault Ste. Marie, MI, graduating from... View Obituary & Service Information

The family of Beatrice "Bea" Brown created this Life Tributes page to make it easy to share your memories.