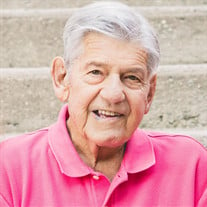 Traverse City - Benjamin R. Price, 81, of Traverse City, passed away Monday, March 6, 2017 at the Grand Traverse Pavilions in the loving care of his family. Ben was born in Detroit to Helen (Berger) and Benny Price. He grew up in the Detroit area where he attended Mumford High School. He enlisted in the United States Air Force where he would serve for 21 years, retiring at the rank of Tech Sargeant. Ben met and married his wife Jan while stationed at Chelveston Air Base in England. Soon after they married, they moved to the United States. Prior to his retirement and discharge in 1975, Ben's career would have the family stationed in Arkansas, Nebraska, Germany and Texas . Following his retirement, Ben and Jan moved to the family cottage on Long Lake in the Traverse City area to be near his mother and brother, Ben continued working at Empire National Bank. He was an avid train collector who enjoyed spending his spare time at Trains and Things. Ben also loved camping, bowling, and golfing. He and Jan traveled to England, and around the United States, spending time with family and friends. Ben is survived by his loving wife of 55 years, Jan; his children, Debra Mikko, Daryl (Paulette) Price and Lisbeth (Nick) Bank; his grandchildren, James, Mary, Addison, Alecia, Katey, his nieces Jennifer and Beth, and honorary grandson Jack (Chan) He was preceded in death by his parents and brother Jim. Visitation for Ben will take place from 4 until 7 p.m. Thursday, March 9 at the Reynolds-Jonkhoff Funeral Home. The memorial service for Ben will begin at 11 a.m. Friday, March 10 at Advent Lutheran Church (8481 Lake Ann Rd.) Lake Ann, with Pastor Chrysanne Timm officiating. The family has asked that memorial contributions in Ben's name be directed to Advent Lutheran Church, P. O. Box 249, Lake Ann, MI 49650 or to the Munson Dialysis Center, c/o Munson Regional Healthcare Foundation, 1150 Medical Campus Dr., Traverse City, MI 49684. The family is being cared for by Reynolds-Jonkhoff Funeral Home and Cremation Services.

Traverse City - Benjamin R. Price, 81, of Traverse City, passed away Monday, March 6, 2017 at the Grand Traverse Pavilions in the loving care of his family. Ben was born in Detroit to Helen (Berger) and Benny Price. He grew up in the Detroit... View Obituary & Service Information

The family of Benjamin Robertom Price created this Life Tributes page to make it easy to share your memories.