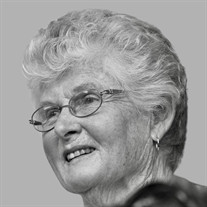 TRAVERSE CITY — Bernadette Lucy “Bernie” “Toots” Rooney McGee, 88, was received into the arms of God on Monday, January 24, 2022. Bernie was born July 8, 1933 in Grand Rapids, MI and received a Bachelors in Nursing from Mercy College of Detroit. Bernie and her husband William (“Bill”) met while serving their community as nurses. They married on April 7, 1956 at Holy Rosary Church in Flint. This began 54 years of a faith-filled marriage until Bill’s death in 2010. Bernie and Bill exemplified their marriage vows spoken so many years ago; for richer or poorer, for better or worse, in sickness and in health. All who knew them have benefitted from witnessing their testament of faith and love. They both lived beautiful, impactful lives. Bill and Bernie moved to Traverse city in 1956 where they became members of the Immaculate Conception (IC) parish. Throughout her more than 60 years as a parishioner, Bernie remained active, faithful, and committed to the IC church. It was commonplace for Bernie and Bill to welcome parish priests and nuns into their home, further strengthening their faith. Lenten season was met with a weekly rosary with all nine children kneeling and praying with them. Bernie was involved in prayer chains, pancake breakfasts, and assisted Bill with his leadership positions within the IC community. The doors were always open and people were always welcomed at the McGee homestead where spiritual awakenings often took place. Cursillos and De Colores enveloped the home while guitars, prayers, and song filled the house with love. Bernie has always been the pillar of strength for her family. She was the matriarch of the Malewitz, Rooney, and McGee clans. Bernie had a twin brother, Bernard. They took different paths in life with mom, “Toots,” marrying and raising nine children, and Bernard, “Turk,” following his calling into the priesthood. He always reminded Toots that she was the elder of the two. Bernie was a mother to more than just her nine biological children. Over the years, the McGees welcomed unwed mothers, troubled teens, young adults, and VISTA volunteers from Peshawbestown reservation into their home. Her children’s friends always knew “Mom and Dad’s” home was a safe haven as they were “one of the kids.” There was always a place at the table and a warm place to sleep. On Nov 1, 1971, Bill’s life took a drastic turn when he survived a near-fatal car accident. Bernie became a homemaker, mother, and Bill’s nurse and caregiver during the day, and the breadwinner and full-time nurse at night. Bill’s constant pain and suffering did not deter her. She never complained and when she was told she was a “saint” for caring for Bill, she responded saying “He is my husband and I love him. I wouldn’t have it any other way.” Bernie retired six times from various jobs in the medical profession. Those who knew her loved her and will continue to live in her example. Her legacy will live on. Bernie’s loves in life were many, including sports, cribbage, puzzles, cooking, and her faith. Bernie and Bill were very socially active and participated in the Traverse City Hunt Club and in city bowling leagues. She was a part of a bridge group that met weekly for over 40 years (Barb Shrift, Grace Glynn, Ronnie Green, Lorna Ameel, and Mary Ann Drury). She loved her “Beaumont Girls” from her nursing days. She was the “bookie” for the family and friends’ football pool where she would call participants weekly to select their picks for NFL games. Bernie was preceded in death by the love of her life William “Bill” McGee, parents George and Helen (Malewitz) Rooney, her twin brother Rev. Bernard “Turk” Rooney C.Ss.R., her great-grandson Zachary Moll, sisters in saw Denise (Maurice) O’Halloran, Sr. Borgia Ann McGee S.S.J., and brothers in law John (Marian) McGee and Pat (Rose) McGee. She is survived by her nine children: Kathleen (Bill Stallman) McGee-Stallman, Patricia (Michael) Martin, Daniel (Janet) McGee, Mary (Francis Cullen) McGee-Cullen, Thomas (Alessandra) McGee, and John (Neva) McGee of Traverse City, Kevin (Ann) McGee of Nashville, and Kieran (Kevin Shafer) McGee and William (Staci) McGee of Rockford. Bill and Bernie were blessed with 20 grandchildren, Gina (Scott), Alana, Erin, Will, Monica, Audrey, Marley (Justin), Shealyn (Justin), Ryan (Brianna), Kennedy (Kevin), Helen, Connor, Evan, Delaney, Matheus, Justine (John), Sydney, Sean, Keegan, and Kati, and five great-grandchildren, Nick, Sam, Hayden, Wynn, and Nolan. She had numerous nieces, nephews and cousins. Visitation will be held at Reynolds-Jonkhoff Funeral Home today, January 27 from 4 to 8 p.m. with a rosary service (webcasted at rjfhtv.com) at 7 p.m. A Mass of Christian Burial will be held at 11 a.m. with visitation one hour prior on Friday, January 29, at Immaculate Conception Church. The mass will also be live streamed at www.immaculatetc.org for those unable to attend. Burial will take place at Oakwood Catholic Cemetery. Please remember Bernie through memorial gifts to Father Fred Food Pantry or Hospice of Michigan in memory of Bernie McGee. The family would like to offer our deepest gratitude to the numerous doctors and staff who have cared for Mom over many years. Our many thanks go out to Deacon Rene Hoenschied, the Hospice of Michigan staff, Boardman Lake Glens staff, and Kate for their gentle care of Mom in her final days. Kindly share thoughts and memories about Mom online at www.reynolds-jonkhoff.com. The family is being served by the Reynolds-Jonkhoff Funeral Home and Cremation Services. Mom was a living example of faith, hope, and love. Mom, Grandma, Nana, loving wife, mother, and caregiver of many, we thank you for your selflessness, kindness, acceptance of others, and warm and forgiving spirit. We love you always.

The family of Bernadette "Bernie" Toots" Lucy McGee created this Life Tributes page to make it easy to share your memories.