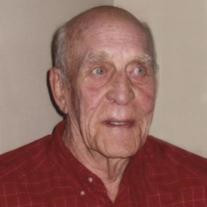 Bernard C. Conklin, 88, of Traverse City, Mi, passed away January 19, 2013, at his home surrounded by his family and his beloved dog, Daisy. Bernard was born on July 2, 1924, in Owosso, Mi, to the late Chester James and Florence (Confer) Conklin. Bernard shared 67 wonderful years of marriage with the love of his life, Nona, before she passed away in 2009. Their love of family inspired us all and they rarely missed a family event. The world is a better place because of their strength in family, faith and love. Bernard influenced so many lives and his light will shine on through his family as we honor him. Bernard honorably served in the United States Army in World War II as a private. He was at Anzio Beach, Italy, where he was wounded and lost his leg and sight in one eye at the age of 18 and newly married. He went on to Eastern Michigan where he received his teaching degree. His passion was coaching and he was employed for 33 years as a teacher and coach of football and baseball. Bernard's 1965 football team became the only undefeated team in Owosso High history. He also coached for the American Legion Baseball League where one of his teams went all the way to the national regional finals. When Bernard taught at Fort Custer, he took a group of students to the very first Special Olympics at Soldier Field in Chicago. It was such a thrill and honor for those students to participate in the Olympics and receive medals. All through his life, Bernard was a passionate Michigan Wolverine fan and loved to watch them play. Bernard and Nona retired to Fairfield Glade, Tennessee, in 1986. He was an active member of the Fairfield Glade Community Church where he enjoyed singing in the choir and was a volunteer in the Stevens Ministry group. In his spare time, he loved to golf, play bridge and watch football. He was also active in the Fairfield Lions Club. Later in his retirement, he became a mentor/mediator for the court system to help mediate cases to avoid trial. Bernard is survived by his two daughters, Patricia Conklin and Norma Raffaelli; two sons, Thomas (Tara) Conklin and Richard (Nancy) Conklin; 17 grandchildren; 26 great grandchildren; 1 great-great grandchild as well as many other loving family members and friends. Bernard was preceded in death by his wife, parents, son-in-law, John "Jack" Raffaelli, granddaughter Breanny, and siblings Emma, Marjorie, Ronald and Norman. Memorial services will be held at the First Congregational Church in Suttons Bay, Mi on Monday, February 4 at 1:00pm with visitation beginning at 12 noon. Memorial contributions in memory of Bernard may be directed to Hospice of Michigan or to the Disabled American Veterans. Please visit www.reynolds-jonkhoff.com to share your thoughts and memories with the family. The family is being served by the Reynolds-Jonkhoff Funeral Home and Cremation Services.

Bernard C. Conklin, 88, of Traverse City, Mi, passed away January 19, 2013, at his home surrounded by his family and his beloved dog, Daisy. Bernard was born on July 2, 1924, in Owosso, Mi, to the late Chester James and Florence (Confer) Conklin.... View Obituary & Service Information

The family of Bernard C. Conklin created this Life Tributes page to make it easy to share your memories.