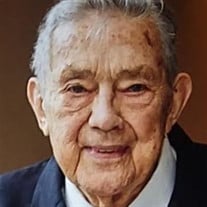 Bert Frederick Voorhees, 86, of Traverse City passed away peacefully Friday, November 29, 2019 at his Traverse City home. Bert was born on Friday, January 27, 1933 to the late Corneila "Catherine" (Izenbart) and Milo Herbert John Voorhees in Grand Rapids. He graduated from Kelloggsville High School. He continued his education in the baking field. Bert worked for many commercial bakeries, including Oven Fresh in Grand Rapids and Chef Pierre/Sara Lee here in Traverse City. On March 25, 1955, he married the former Jean Bernice Boss in Martin, Michigan. A long time member of Faith Reformed Church in Traverse City, Bert was well known for his incredible work ethic and his love of family. He was a musher and enjoyed raising the dogs for that hobby. He accomplished his goal of visiting Alaska with his mushing friends. He was a wood carver, enjoyed golfing, swimming and bowling and also enjoyed camping and RV'ing. He was a sports enthusiast, enjoying basketball and track. He was always willing to try something at least once and could easily make friends with anyone. His greatest joy was his family and being with them as much as he could. Bert is survived by his wife Jean; his children, Patti (Vinnie) Orsini of Baltimore, MD, Brian Voorhees of Lake Ann, Boyd Voorhees of Traverse City, Katie (Chuck) Fouchey of Interlochen and Julie (Dick) Nelson of Lake Odessa. Also surviving are 13 grandchildren and 8 great grandchildren. He was preceded in death by his brother Hank. Visitation will take place on Tuesday, December 3 from 9 until 11 a.m. at The Reynolds-Jonkhoff Funeral Home. Visitation will continue at 12:30 pm at Faith Reformed Church, 1139 E. Front Street, Traverse City, also on Tuesday. Following the visitation, the funeral service will begin at 1 p.m. Burial will be in Grand Traverse Memorial Gardens. The family has asked that Bert remembered with memorial contributions to Faith Reformed Church.

The family of Bert F. Voorhees created this Life Tributes page to make it easy to share your memories.