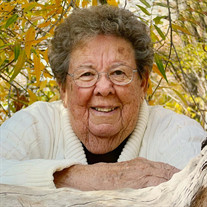 Betty Jane Finout, 96, of Lake Ann passed away August 6, 2019 at Munson Hospice House in Traverse City. Betty was born in Clare, Michigan, December 20, 1922, daughter to Jesse R. and Gladys (Lackie) Hampton. Betty’s entire time on this earth was one big adventure. She was the sort who loved to explore and push her limits. She had a long and impactful career as a physical education teacher and coach at various school districts: Owosso, Lake Fenton, Fenton, and Holly. Through her passion for athletics and fitness she touched the lives of many students throughout her tenure. After retirement Betty moved to Traverse City for a short time, and then built her dream home on Lake Ann. She wanted to live on the northwest side of the lake so her precious 1941 Aeronca Super Chief (float plane) would have a safe place to rest until her next airborne adventure. Betty, an avid pilot flew into her mid-seventies. She was an active member of the Ninety-Nines, International Organization of Women Pilots. Betty was extremely active in her later years, and was heavily involved with the Senior Olympics, taking home wins in all sorts of events, all over the country. Betty loved spending time on the water, especially fishing for steelhead. Betty is survived by her long-time friend and partner Samantha Niergarth; children Guy Finout III (Linda) and Janet Roberts; grandson Harry Ehrman IV; and many other extended family. She was preceded in death by her parents; husband Guy Finout Jr., and daughter Nancy Finout. Join Betty's family in honoring and celebrating her life, Saturday, August 17, 2019, 3PM, at Reynolds-Jonkhoff Funeral Home, 305 Sixth Street, Traverse City, MI 49684. Receiving of family and friends will begin at 2PM and will continue until the time of service at the funeral home. Betty will be laid to rest at Cherry Grove Cemetery, Clare, MI at a later date. Betty and her family are being cared for by the Reynolds-Jonkhoff Funeral Home and Cremation Services.

The family of Betty Jane Finout created this Life Tributes page to make it easy to share your memories.