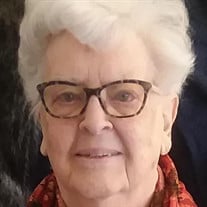 Betty Lou Harmon (Phillips), age 90 of Traverse City, Michigan passed on from this life to be with her husband Dale Joseph Harmon on June 28, 2020 at her final home Traverse Manor of Traverse City, Michigan. Betty was in Hospice care her final days but even with the current pandemic was able to welcome family members in person or via internet to say her final goodbyes and welcome the love her family had for her. She will be missed by all for her graciousness, sense of humor and warm heart. Betty and Dale were cremated as per their wishes and will rest in Northlawn Memorial Gardens next to Dale's parents, Ben and Gladise Harmon, in Peninsula, Ohio. Betty was born on September 13, 1929 to Edwin Phillips and Ida Pearl Phillips (McCutcheon) of Butler, Pennsylvania. As her father worked for Metropolitan Life Insurance Company and Jewel Tea Company the family lived in Pennsylvania and later Ohio settling in Cuyahoga Falls where she met the love of her life Dale. Betty’s parents moved to East Jordan, Michigan to open and operate the Rustan Resort on Lake Charlevoix which is where she developed a love affair with the state. Betty and Dale married on June 13, 1951 and they honeymooned in Traverse City and Elk Rapids. Dale served in the US Navy as a Lieutenant and served on the Atlantic Fleet during the Korean War, so they moved around bases on the East Coast. After the war they moved to Cuyahoga Falls, Ohio and later Copley, Ohio as Dale went to work as a Senior Research Associate with the BF Goodrich Company at their research facility in Brecksville, Ohio. They raised three sons together and had seven grandchildren and six great grandchildren. After retirement they decided to be closer to family and friends and moved to Traverse City, Michigan in 2007. Betty loved to crochet, travel all over the eastern United States, Mexico, and Canada. She was a crafty card player and loved euchre, pinochle, and many other card games that she would play with family and friends. She loved pets and always had cats and dogs to keep her company. Betty loved her Scottish roots (Clan - Mc Donald) and would travel around the US and Canada to see the gathering of the clans whenever possible. Betty was active in the Betty’s Club of Traverse City and enjoyed going out to the monthly luncheons with the ladies. Betty could be strong willed and stubborn, but she always had a kind and gracious heart and loved to shower gifts on her family and friends be it cards for every occasion or stockpiles of presents at Christmas. The family joked that she single handedly kept Hallmark Company in business due to the number of cards and ornaments she purchased there over the years. Betty is survived by three sons Phillip (Deborah) of Harbor Springs, Michigan, Paul (Jill) of Parrish, Florida and Perry (Kristen Elliott) of Traverse City, Michigan. She had seven grandchildren: Jim of Grand Rapids, Michigan, Scott (Beth) of Columbus, Ohio, Lauren Weinkein (Bruce) of Parrish, Florida, Emily of Rockford, Michigan, Kyle of Parrish, Florida, Adin of Traverse City, Michigan and Austen of North Hollywood, California. Great-Grandchildren: Emma and Sarah of Columbus, Ohio, Chole and Evan of Parrish, Florida, Aubrey of Rockford, Michigan, and Kimi Jane Van Antwerp of Leroy, Michigan. Betty is also survived by seven nieces and nephews, eight grand nieces and nephews and seven great-grand nieces and nephews. Betty was preceded in death by parents Edwin and Pearl Phillips, Sister and Brother-in-Law Marion and Jack Sutliff and husband Dale Joseph Harmon. The family suggests memorials to the Grand Traverse Humane Society. Betty and her family are in the care of the Reynolds-Jonkhoff Funeral Home and Cremation Services.

The family of Betty Lou Harmon created this Life Tributes page to make it easy to share your memories.