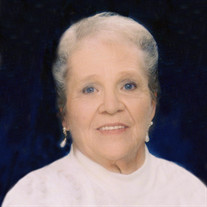 Betty Joyce Nemec, 89, of Traverse City passed away on Sunday, March 8, 2015, at Munson Medical Center. Betty was born on November 2, 1925, in Kewadin, MI to the late Albert F. and Lena (Kaiser) Gribi. She graduated from Elk Rapids High School in 1943. Her first job after high school was with Parts Manufacturing in Traverse City where she held a secretarial position for the foreman of the company. In 1944 she met William Nemec and on November 30, 1945, they were married in the Kewadin Methodist Church. They moved to Traverse City and for the next five years, lived in the house where her husband was born. Bill and Betty and their two girls moved to Big Rapids where Bill was enrolled at Ferris State while Betty took a job at Dunham’s Factory. They stayed the next five years in Big Rapids and had two more children. They moved back to their home in Traverse City in 1955. Bill and Betty went to work for Peterman’s Eastland Drug. In 1963, they purchased their own store, “Village Pharmacy”, on Garfield. They were in business until 1983. when they sold the pharmacy and retired. After retiring from the drug store. she worked through the court system. doing guardianship for family and friends. Betty had many hobbies, some of her favorites were needle point, fishing, mushrooming and baking. Betty was known for her famous pies. People came from all over to get a piece of her pie, at the soda fountain, in the pharmacy. Betty was preceded in death by her parents, her loving husband Bill, and her two brothers, Richard and Kenneth Gribi. Betty is survived by her four children; Cathy (Steve) Conklin of Ramona, CA, Darlene Short, Michael (Lillian) Nemec and Mark (Cathy) Nemec all of Traverse City. She has seven grandchildren; Matthew, Jordan and Marcus Nemec, William (Jessica) Short, Abbey Nemec and Tanya and Jamie Mowrey, she has one great-grandson; Joshua Collins. She is also survived by a sister-in-law; Etta Gribi and many nieces and nephews. Betty’s family would like to extend a sincere thank you to the Grand Traverse Pavilions where she received outstanding care from the very dedicated staff. A funeral service honoring Betty will be held at 11:00 a.m. on Wednesday, March 11, 2015, at the Reynolds-Jonkhoff Funeral Home, 305 Sixth Street, Traverse City, with visiting one hour prior. Neil Rockey will officiate. Those planning an expression of sympathy may wish to consider a donation to the American Diabetes Association. Please feel free to share your thoughts and memories with Betty’s family at www.reynolds-jonkhoff.com. The family is being cared for by the Reynolds-Jonkhoff Funeral Home and Cremation Services.

The family of Betty Joyce Nemec created this Life Tributes page to make it easy to share your memories.

Betty Joyce Nemec, 89, of Traverse City passed away on Sunday,...