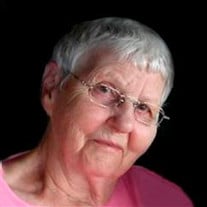 TRAVERSE CITY — Betty Jane Rosenow, 89, of Traverse City, went home to her Lord Thursday, Jan. 6, 2011.Betty was born Sept. 4, 1921, to William and Mabel (Shunk) Daykin. She was a graduate of Cass Technical High School in Detroit. On Oct. 11, 1941, Betty became the bride of Ralph Rosenow at the Methodist Church in Highland Park. She supported the nation's war effort while Ralph served in the U.S. Army during World War II.Betty and Ralph have made their home in Traverse City for over 25 years, moving here from the Detroit area. In Detroit, Betty was an active leader for Pioneer Girls. In her early years, she was a gifted athlete, having been an all star baseball player. She was an accomplished golfer, playing in leagues until she was 87. She loved English literature, working crossword puzzles and was a vicious Scrabble player.Betty is survived by her husband of 69 years, Ralph; her children, Ralph Rosenow Jr., of Kalkaska, Raune and her husband, Bruce Lamborne, of Arvada, Colo., Kathleen Rosenow and her husband, Frank Spevacek, of Julian, Calif.; her grandchildren, Andrew and Peter, of Colorado, and Ann, Robyn and Jill, of California; and her great-grandchildren Matt, Jamie, Hannah and Lyric, of Colorado.She was preceded in death by nine siblings.The family will receive friends and family from 10 a.m. until noon Saturday, Jan. 15, at Reynolds-Jonkhoff Funeral Home. Graveside memorial services will take place in the spring at Linwood Cemetery in Long Lake Township.Those wishing to make a memorial contribution in Betty's name may direct it to Wheaton College, 501 College Ave., Wheaton, IL 60187-5593, or online at www.wheaton.edu.The family is being served by Reynolds-Jonkhoff Funeral Home and Cremation Services.

The family of Betty Rosenow created this Life Tributes page to make it easy to share your memories.