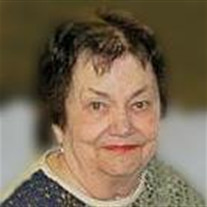 Beverly “Bev” Ann Nemetz of Traverse City passed away October 26, 2015 at Munson Medical Center with family at her side. Bev was born January 26, 1935 in Alma, Michigan to Ernest and Gladys (Anderson) Dast. She spent her childhood in Alma and graduated from Alma High School. She was active spectator in all Alma’s High School and Central Michigan University sporting events. Alma is also where she met and later married the love of her life Billy Duane Nemetz on November 25, 1953 after he returned from serving our country in Korea. As she supported Bill in his career, they moved from Alma to Harbor Springs and finally settling in Traverse City in 1959. She quickly made Traverse City her new home. Being fiercely patriotic, Bev became active in political and social activities, including becoming one of Traverse City’s first “Neighborhood Watch” captains in the Traverse Heights neighborhood. She also helped by working in the voting sectors of Traverse City. After being a wife, mother and housewife (a ferocious housekeeper per her boys’ memory) for many years, she went on to work and retired from TCAPS as a lunchroom aide, classroom aide, and daycare provider. Bev enjoyed travel, visiting casinos, family outings at Higgins and Fredrick Lake Cabins, and the Anderson Family Reunions in Alma. She also enjoyed reading Robert Frost poetry, was an animal lover, Nascar fan, and a true blue University of Michigan fan: Go Blue! But her true calling was being a natural and joyful mother to her boys William and Steven. She then extended that to being a fun loving grandmother and great grandmother. Her grandchildren remember her creative bike parades in the neighborhood, adventurous storytelling and sleepovers on the living room floor. She is survived by her sons William (Marsha) Nemetz and Steven (Marcie) Nemetz both of Traverse City; grandchildren George Nemetz of Traverse City, Emily Nemetz, Kevin (Michelle) Lantzer of Traverse City, Christopher Nemetz of Grand Rapids, Allison (Alex) Schajter, Douglas Nemetz, Tara Lantzer and Kelli Nemetz all of Traverse City; grandchildren Ruby Lantzer and Olivia Nielson-Nemetz. She was preceded in death by her husband Bill, her brother Jack, and her parents. Visitation will be held for family and friends on Thursday Oct. 29, 2015 from 5 to 7 p.m., at the Reynolds-Jonkhoff Funeral Home. A memorial service will be held at 3 p.m. on Friday Oct. 30, at the funeral home, with visitation held one hour prior. Memorial contributions in Bev’s name may be directed to The Father Fred Foundation. Please share your thoughts and memories with Bev’s family by way of her online guestbook at www.reynolds-jonkhoff.com. The family is being cared for by the Reynolds-Jonkhoff Funeral Home and Cremation Services.

Beverly &#8220;Bev&#8221; Ann Nemetz of Traverse City passed away October 26, 2015 at Munson Medical Center with family at her side. Bev was born January 26, 1935 in Alma, Michigan to Ernest and Gladys (Anderson) Dast. She spent her childhood... View Obituary & Service Information

The family of Beverly "Bev" Ann Nemetz created this Life Tributes page to make it easy to share your memories.