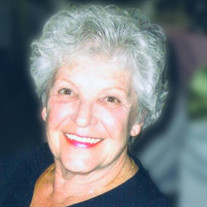 Beverly Jean (“Bev”) Carroll passed away on January 21, 2021. (And her children thought she was holding out for the inauguration of our 46th president.) She was born on Mother’s Day, May 8th 1932 to Elmer and Marie Richards. And perhaps that was no small coincidence in that she always embodied the very best qualities of an exceptional mother. Growing up in Greilickville, just across the road from West Bay, she enjoyed ice skating in the Winter and swimming in the Summer with her siblings, Gary, Gloria, Nancy and Kay. She was a 1950 graduate of Traverse City Central. She gladly maintained several of her high school acquaintances attending luncheons and most recently her 65-year class reunion. She was married to Bernard T. (“Bernie”) Carroll on August 25, 1951, and early on assisted him in caring for his mother, Mary, and working the family cherry farm. Being at the half-way point to (or from) town on the Old Mission Peninsula, their farmhouse welcomed frequent visitors; the coffee pot was always on and they loved “drop-in” company and conversation about the latest peninsula happenings. One of her favorite pastimes was baking. There was hardly a birthday or special event when she was not called upon to whip up one of her tasty cakes. Her fruit pies were also out of this world. Her cherry pie was legendary. At Christmas time she worked tirelessly for several days baking cookies, candy and fudge. At the end of her efforts ten to 15 trays would be delivered to friends and family. Simply, her baking was a demonstration of her love for all those she cared about. Her Sunday dinners were also a special treat; a pork loin, mashed potatoes and gravy along with other delicacies were always well prepared and served to perfection. She hosted a Christmas Eve party, which was a delight for family and friends for countless years. Bev was a member of the St. Joseph’s of Mapleton Catholic Church and its Lady’s Guild. She served as Eucharistic minister, and she was always available to meet the needs of another parishioner, whether making a casserole, responding to a call from a prayer-chain member, or ironing the altar linens. But more importantly, she lived her Catholic faith in her everyday life through service, generosity and love. Family always came first with Beverly. She loved all her children, grandchildren and great grandchildren and spoiled them every chance she could. Even being employed full-time, she never missed a school or sporting event involving her kids. She was always well dressed, kept a spotless home, and prepared five-food-group meals nightly. Not only was she each child’s greatest cheerleader, but she was also a consummate caregiver. She cared for two elderly aunts and her late husband without hesitation or complaint. Hard work was a basic tenet of her life. She lied about her age to get her first job as a hostess at the Park Place Hotel. After high school she was employed by Michigan Bell Telephone. Her career at Bell lasted 37 years, first as a switchboard operator then later as a clerk in the Assignment Department. After her retirement in 1998 she enjoyed traveling, reading, volunteering at the Father Fred Foundation, and an occasional trip to the casino. She is survived by her three children; Richard (Julie) Carroll, and Daniel (Teed) Carroll of Traverse City and Cynthia (Barry) Wolf of Grand Blanc. And two sisters; Kathleen (“Kay”) (Jerry) Donner of Traverse and Nancy (Wally) Phillips of Petoskey. Three grandchildren; Aynsley (Matt) Born of Traverse City, and Courtney (Nate) Emerick and Lindsay (Andy) Roeser of Grand Blanc. Six great-grandchildren; Parker Roeser, Cameron Roeser, Emerson Roeser, Jack Emerick, and Briggs Born and Tory Born, a number of exceptional nieces and nephews as well as her dearest best-friend, Lenore Berlin. She was predeceased by her parents, Elmer and Marie Richards, her husband Bernie Carroll, and her brother Gary Richards and sister Gloria Kinnee. It is the family’s intent to hold a funeral Mass in the Spring for which notice will be published in this newspaper. In lieu of flowers, memorial contributions may be directed to the Father Fred Foundation. https://www.fatherfred.org/ or 826 Hastings St., Traverse City, MI 49686.

The family of Beverly Jean Carroll created this Life Tributes page to make it easy to share your memories.