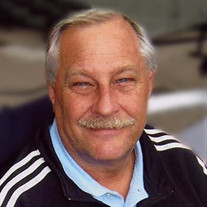 Sunday August, 22, 2021 was a picture perfect summers day. The kind of day that in good health, William “Bill” Ross Dowswell, would have been golfing, fishing, enjoying a paddle in a kayak or canoe, swimming in the bay or cheering on the Detroit Tigers watching “Miggy” hit number 500. Sadly Bill lost his brief, but valiant battle with cancer at age 68 on a glorious day at Munson Hospice House. Bill was born on March 15, 1953 in Detroit, Michigan to Albert Ross Dowswell and Kathleen (Pettypiece) Dowswell and big sister Carol. The young Dowswell family left the Detroit area in the mid 1950’s to find their true home in Traverse City. They were the 27th family to pioneer out on the peninsula overlooking West Grand Traverse Bay. It was here that Bill learned very early to embrace anything that had to do with being outdoors in every season. Bill graduated from Traverse City Central High School in 1971. While there he participated in many sports including football, baseball and downhill skiing. After attending college for several years Bill joined his father in the running of the Grand Traverse Newspaper Distributors where both father and son referred to themselves as “paper boys”. It was during the winter of 1974 that Bill met his future wife, Renee on the ski slopes of Schuss Mountain. They quickly became best friends, loving nature, concerts, bonfires and hanging out with friends together. They were married on September 20, 1975. Bill’s biggest life accomplishments were his two children Griffin and Madison. They will both tell you what a loving, devoted father they had. He was also their best friend, coach in everything from life to softball, baseball, skiing and soccer. He was awarded the TBAYS coach of the year in 2002. Bill will always be known for being “a great guy”. He would do anything for a friend or neighbor. He volunteered his time for so many things including Grand Traverse Ski Club and past president of Ducks Unlimited. Bill was also a lifetime (30 year) member of the Elks Club where he was president of the Elks Club Golf League and remembered as bell ringer extraordinaire. Bill is survived by his wife Renee (Noseworthy) Dowswell; son Griffin Ross Dowswell; daughter Madison Kaye Dowswell (Edward Nahr); sister Carol (Dowswell) Moss and her husband Robert. Bill is also survived by a very special nephew Ryan Brown, his wife Jude and their three beautiful daughters Ava, Addyson and Aubrey. Preceding Bill in death are his parents, Ross and Kaye Dowswell and niece Sarah Kathleen Brown. There will be a celebration of life to honor William Ross Dowswell at the Elks Club sometime in the spring when we can gather together without masks to hug and cry and remember Bill properly. In lieu of flowers, memorial donations can be made to Ducks Unlimited or Munson Hospice House.

Sunday August, 22, 2021 was a picture perfect summers day. The kind of day that in good health, William &#8220;Bill&#8221; Ross Dowswell, would have been golfing, fishing, enjoying a paddle in a kayak or canoe, swimming in the bay or cheering... View Obituary & Service Information

The family of Bill Dowswell created this Life Tributes page to make it easy to share your memories.