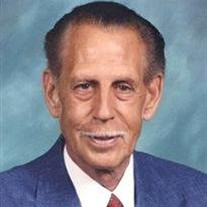 CEDAR – Bill Warren Hoxie passed into the arms of God on Saturday, May 18, 2019, at the Traverse Manor Assisted Living Center surrounded by his loving family. The day prior, Bill and his family celebrated his 91st birthday! A lifelong resident of Leelanau County, Bill was born to the late Warren Harlan and Alice Marguerite (Witkop) Hoxie on May 17, 1928. Bill honorably served in the U.S. Army from 1946-1948. On May 8, 1965, he married Clarice Mae Novak, and together they joined two families into one. Bill and Clarice just celebrated their 54th wedding anniversary. Bill’s passion as an electrician led him into service with the Traverse City State Hospital for 34 years, the Electrical Inspector for Leelanau County for 13 years, and serving as a Director of Cherryland Electric. He was proud to be a cherry farmer and live on the family’s centennial farm. Bill loved horses…especially Belgian horses! He attended horse sales whenever he could and raised 3 sets of Belgian colts. As a younger man, Bill enjoyed flying his own plane. Bill will be missed by his wife Clarice; children Bonnie Saxton, Barbara (Victor) Johnson, Brian (Mary) Hoxie, Dale (Maria Teresa) Aprill, Sherry (Steve) Purkiss, and Jeff (Sandy) Aprill; grandchildren Dthia, Robert, Kevin, Janine, Tara, Warren, David, Kendra, John, Lauren, and Alex; great-grandchildren Maddox, Logan, Kenleigh, and Talan. Those passing before Bill include his son Ken Aprill, grandson Eric Hoxie, son-in-law Paul Kalkwarf, brother Jack Hoxie and his wife Doris, and sister Wanda Crampton and her husband Norman. The family will receive friends on the evening of Wednesday, May 22 from 5-7 P.M. at the Reynolds-Jonkhoff Funeral Home. A funeral service and full military honors will follow on Thursday, May 23 at 11 A.M. at the funeral home; additional visitation beginning one hour prior. Pastor John Clark of West Side Community Church will officiate. Interment is to follow at Grand Traverse Memorial Gardens. Those wishing an expression of sympathy in Bill’s name may do so to the West Side Community Church, Hospice of Michigan, or Sarcoma Foundation of America. The family would like to extend their sincere appreciation and thanks to the hospice staff and all those involved at the Traverse Manor for their excellent care of Bill. Bill and his family are in the care of the Reynolds-Jonkhoff Funeral Home and Cremation Services.

CEDAR &#8211; Bill Warren Hoxie passed into the arms of God on Saturday, May 18, 2019, at the Traverse Manor Assisted Living Center surrounded by his loving family. The day prior, Bill and his family celebrated his 91st birthday! A lifelong... View Obituary & Service Information

The family of Bill Warren Hoxie created this Life Tributes page to make it easy to share your memories.

CEDAR – Bill Warren Hoxie passed into the arms of God on Saturday,...