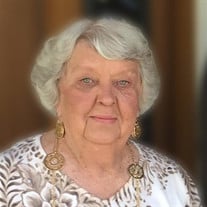 SHARON, SC - Billie Jean Gardner, 82, of Traverse City, passed away on January 1, 2016 in Sharon , SC. Billie was born on June 21, 1933 in Lansing to her parents the late Vernice L. and Caroline (Taylor) Cramer. After graduating high school she attended business school and went on to be an account executive with Oldsmobile and the Dept. of Agriculture. She married Leonard Jackson Gardner on August 22, 1985 in Lansing and the couple lived in Arizona, Florida, and Traverse City. Billie enjoyed playing Bridge, Scrabble, playing her keyboard, "dimes", traveling, and was fondly known as the "humming bird lady" for her love of humming birds. She was a member of the First Congregational Church and served on the missions board and volunteered at the Thrift Shop. She was a member and a past president of the Trillium Garden Club, and a past Chaplain for the Lansing Pioneer Civitans and she served on numerous PTA and Girl and Boy Scout boards. Billie is survived by her children, Orell Shaw III of Traverse City, Alisa Marie Shaw of Lansing, Jason (Anita) Shaw of Sharon, SC., Jack (Janet) Rouse of Sharon, SC.; 8 grandchildren; 3 great-grandchildren; siblings, Barbara Olger of Lansing, Bethany (Glenn) Alward of Zephyrhills, FL. She was preceded in death by her husband Leonard Jackson Gardner; siblings Bernice Miner and Beverly Lorenzen. Visitation will be held on Thursday January 7, 2016 from 6 - 8 p.m. at the Reynolds-Jonkhoff Funeral Home, A funeral service will take place at the First Congregational Church at 11 a.m. on Friday 8, 2016, with a visitation held one hour prior. Burial will take place at Oakwood Cemetery following a luncheon. Memorial contributions in Billie's name may be directed to the Salvation Army of Traverse City. Please share your thoughts and memories with Billie's family by way of her online guestbook at www.reynolds-jonkhoff.com. The family is being cared for by the Reynolds-Jonkhoff Funeral Home and Cremation Services.

The family of Billie Jean Gardner created this Life Tributes page to make it easy to share your memories.