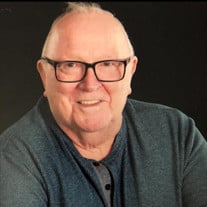 Bobby “Bob” Clay Wise of Traverse City, MI passed away Thursday, Dec. 17th, 2020 at Munson Medical Center in Traverse City at the age of 84 due to complications from Covid-19. Bob was born on November 11, 1936 in Knoxville, TN to George and Leona Wise. Bob graduated from South High School in Knoxville in 1954, and then joined the Air Force where he was stationed in King Salmon Alaska and then Empire, MI. He met the love of his life, Cecilia while stationed in Empire. They were later married in 1958, at St. Francis Church where they have been parishioners for the last 62 years. Bob was a great husband, father, brother, grandfather and great grandfather. He was a quiet, loving man who never complained about his own pains but was always there to comfort others with their needs. He got a special gleam in his eye when he talked and shared pictures of his grand and great grandchildren. He would often remark, “it’s time to go see our little guys” meaning it was time to take a trip to Minnesota or Wisconsin. His sense of humor, passion for life and commitment to his family were second to none. His love of life could be seen every time he got a big old hug from any one of his family members, especially from his grand kids. In his final days, he was able to FaceTime or talk to each one of them and this brought great joy knowing they loved and cared for him. Golfing with his best friends, John and Ray, on a daily basis was his passion. Many stories, possibly half-truths or myths were told about “almost made shots” and golf course etiquette. When he was not golfing, he enjoyed traveling especially to other countries with Cecilia making new memories and friends along the way. Reading and attending live play performances were always an interest of his. The Traverse City High School Sports scene has also lost one of their greatest supporters. He loved watching all sports especially football and basketball. The teams playing did not really matter and we all believe the popcorn at the concession stand was of equal importance. Bob is survived by his wife of 62 years, Cecilia of Traverse City, brother James (Imogene) of Knoxville, TN, sister in Law Nancy (Jack) of Knoxville, TN, children, Mark (Margaret) of Appleton, WI, Tim (Lee Ann) of Eagan, MN, and Teresa of Traverse City, MI, four grandchildren, Josh (Torie) of Inver Grove Heights, MN, Cory (Chelsea) of Burnsville, MN, Hannah (Chris) of Lakeville, MN and Joseph of Appleton, WI and seven great grandchildren, Bailey, Cooper, Mason, Beau, Hailey, Dominic and Gunnar. Bob was preceded in death by his parents, George and Leona Wise, his brother Jerry, his daughter Regina Sue and infant son Robert Clay. In a safer time, a Memorial Service and Celebration of Life Ceremony will be held for Bob for family and friends. In lieu of flowers, please send memorial contributions in his honor to GTACS, Advancement Office, 123 E 11 Street, Traverse City, MI 49684. Memorial gifts will be added to the Regina Wise Memorial Fund that was established in 2016, to enhance the arts program at GTACS. Please stay safe, take care of your family, wear a mask and social distance; the Covid-19 virus is a lonely and devastating virus to some.

The family of Bobby Clay Wise created this Life Tributes page to make it easy to share your memories.