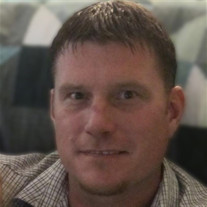 Brent Edward Brakel, 42, of Traverse City passed away from multiple injuries after a motor vehicle accident Wednesday August 17, 2016 in Boston, MA. Brent was born on June 5, 1974 in Traverse City to Bruce and Linda (DeJong-Brakel-Miller.) He graduated from Traverse City Central High School, Class of 1993. Following school he entered into the United States Marines. He was a sharp shooter, underwater rescuer and even earned the prestigious title of Sargent E5 in four years during non-combat service. After his time in the Marines he studied Ocean Engineering at the National Polytechnic college. Brent currently worked for Country Golf on the East Coast building beautiful golf courses. Prior to that he was an underwater welder, driller and blaster for the Eagle Corporation. Brent enjoyed fishing, boating, golfing, horseshoes and playing cards. In his younger years he liked baseball and downhill skiing. He loved animals and being with his friends and family. Brent will be deeply missed by all who knew him. Surviving Brent are his parents; Bruce Brakel and Linda Miller; step-siblings, Talmage (Faye) Miller, Troy (Susan) Miller, Tammy (Jeff) Lewis, his Yorkie fur-sister Bela, and many other loving family members and friends. Brent is preceded in death by his paternal grandparents, Francis and Elaine Brakel, maternal grandparents, Edward and Jean DeJong, and his step-father John R. Miller. A memorial service will be held at 11am on Tuesday, August 30, 2016 at The Bayview Wesleyan Church in Traverse City. A visitation will be held from 10am to 11am at the Church. In lieu of flowers memorial contributions may be directed to the Wounded Warrior’s Project PO Box 758517, Topeka Kansas 66675. Kindly share thoughts and memories with Brent’s family at www.reynolds-jonkhoff.com.

The family of Brent Edward Brakel created this Life Tributes page to make it easy to share your memories.

Brent Edward Brakel, 42, of Traverse City passed away from multiple...