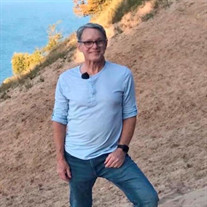 While spending time in nature surrounded by friends, Brian James Cox (68) unexpectedly passed away on Saturday, November 28, 2020. Brian was born on June 2, 1952 in Chicago, IL as the only child of William Cox and Patricia (Hill) Cox. He was raised in the Detroit area and graduated from Seaholm High School. As a child, Brian became enamored with HAM Radio and was a master morse code operator under the callsigns WA8QAF and N8TC. He could carry on a morse code conversation across the globe while simultaneously getting to know you over a cup of coffee. His long and successful career was in telecommunications with AT&T and Fujitsu, relocating to Traverse City, MI, in 1991. A lifelong learner, he received his Associate's Degree from Northwestern Michigan College, graduating at the top of his class with highest honors. He fell in love with aviation, earning his pilot's license in addition to his unmanned aircraft systems (UAS) license and was a local leader and founder of various youth aviation and STEM programs. He was an early pioneer in AETOS, a startup drone company spawned out of NMC and headquartered in Houston, TX. As a deeply curious and passionate man, he could not stay out of the workforce for very long and retired several times, only to find new adventures. Most recently, Brian was working with Northwestern Michigan College and EAA Chapter 234 to develop an aviation program for area high school students. Brian built a cabin on the Boardman River to enjoy his golden years with family and teach his grandchildren about nature, which was his first and most profound love. He was a member of the Grand Traverse Hiking Club and could be found buried in a field reference guide or outside - camping, hiking, backpacking, snowshoeing, skiing, biking, or enjoying a cold Labatt Blue Light by the campfire. He was a walking encyclopedia of all things outdoors and was always an excellent choice for an adventure companion. He was continuously eager for new challenges. He dabbled in photography, at one point learning to develop film in a darkroom he built in his home. He loved to travel, often visiting family in Texas, Japan, Germany, or choosing to spend a few months living in Cartagena, Colombia to work on his Spanish fluency. He was also learning to play the guitar, practiced yoga at least once a day, and developed an interest in mountain biking. There were no strangers to Brian, only friends he hadn't met yet. He had a warm disposition and great sense of humor that put everyone he met at ease. As a natural communicator in both his professional and personal life, he knew how to bring people together. Brian was preceded in death by both his parents. He was a proud, loving father and is survived by his loving daughters, Kristin (Joseph) Reardon and Caitlin (Max) Anderson, and seven grandchildren – Audrey, Evelyn, Marian, Eleanor, Peter, Lillian, and Thomas. Brian’s love will be felt by the countless lives he touched. Until we meet again, blue skies and tailwinds, 73 es 88. On Saturday, June 19, 2021, a memorial service will take place at Reynolds-Jonkhoff Funeral Home in Traverse City, MI, at 3:00 p.m., with a small reception to follow. In lieu of flowers, please send donations to the NMC College of Aviation in Brian's name.

While spending time in nature surrounded by friends, Brian James Cox (68) unexpectedly passed away on Saturday, November 28, 2020. Brian was born on June 2, 1952 in Chicago, IL as the only child of William Cox and Patricia (Hill) Cox. He was... View Obituary & Service Information

The family of Brian James Cox created this Life Tributes page to make it easy to share your memories.

While spending time in nature surrounded by friends, Brian James...