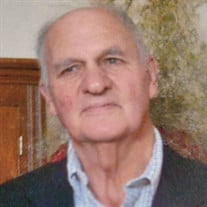 When Bruce Warren Price passed away in the early morning of April 19th, the world lost a very special man. Born In Traverse City on March 5, 1936 to Vero and Helen Maleski Price, Bruce lived in Leelanau County his entire life, mostly in Lake Leelanau. He graduated from St. Mary Catholic School in 1954. While there, Bruce played for the school’s winning basketball team, and passion for that sport was one of the defining features of his life, along with his steadfast love of family, friends, and his Catholic faith. Bruce was never one for sentimentality or romance. When he met Betsey, the love of his life, in the winter of 1959, his way of introducing himself was, “Do you want to dance or not?” So began the relationship that anchored both of their lives for the next six decades. Bruce was drafted into the Army but was honorably discharged after 90 days because of a medical condition which limited use of his elbow. He was a proud and superbly skilled union mason well into his seventies. Early in his career he worked on the Armory in Sault Ste. Marie, which enabled him to show his devotion by visiting Betsey on Drummond Island and his mother in Lake Leelanau every other weekend. Devotion to those he loved distinguished Bruce, and he practiced it his entire life. He and Betsey were married on October 22, 1960 and made their home in Lake Leelanau from that time forward. Bruce was determined early on to be a strawberry farmer, and he and Betsey and their two children, Bruce Floyd and Lisa Elaine, moved to their first farm on the outskirts of the village in 1964. Two more children, Rodney Michael and Naomi Rosemond, were born into the family in the 1970s. Over the course of many years of farming, Bruce and Betsey purchased two more farms so that at one time they had 50 acres of strawberries under cultivation. While farming, which is often precarious, Bruce worked full-time for a masonry company and laid block for basements on the side to make sure his family was well-provided for. From boyhood, hard work and dedication to his family was the hallmark of his life. Even when his masonry job took him many miles away, he returned home each and every night to be with his family. Bruce started a strawberry co-op with four other farmers, and they were able to engage their own broker. His long-time friend, Fred Petroskey, painted a stunning portrait of Bruce, and it adorned bottles of strawberry wine from Leelanau Cellars for years. After Bruce retired from farming, he and Betsey continued to operate a fruit stand adjacent to their home. Active engagement in the community was important to Bruce. He attended county commission meetings regularly, was well-informed about issues, and not afraid to voice his opinion. He was an integral member of the “Leelanau International Coffee Club,” which he formed with several of his friends. Bruce also showed support for the students at St. Mary by attending all of the basketball games for both boys and girls. After Bruce Floyd died in 2000, Bruce and Betsey set up a scholarship fund the following year for seniors at St. Mary Catholic School. A second fund was added in 2015 after Lisa Elaine passed away. Two scholarships are awarded each year based on an application essay that students submit. The Bible verse that was closest to Bruce’s heart was Matthew 16:26, “For what will it profit a man if he gains the whole world and forfeits his soul?” He lived by these words. Bruce was honest, direct, and hardworking. He never met a stranger, and treated everyone with respect and dignity, from elected officials to the migrant workers who helped on his farms, some of whom brought their children back to meet him after he was no longer farming. Bruce built many strong and enduring relationships. He touched many lives and had endless tales to share about the good times he’d had with his family and many buddies. He was steadfastly proud of and protective of his family, and he always took good care of them. Bruce was preceded in death by his father and mother, Vero and Helen Price, his older brothers Roderick and Larry, his son Bruce Floyd (fiancé Kati Wright) and his daughter Lisa Elaine. He leaves many to grieve his passing, especially Betsey, his wife of 61 years, son Rodney (Candi) Price of Hastings, Michigan and daughter Naomi (Steve) Price of Eagle. He leaves three grandchildren, Ryan Ogden and Katelyn and Adelyn Price, as well as great granddaughter Elaine Ogden. Betsey, Rodney, and Naomi wish to thank the caregivers at Medi-Lodge in Suttons Bay for their tender care of Bruce. Funeral will be held Saturday, May 14 at St. Mary Catholic Church in Lake Leelanau at 11 AM. Those wishing to make a donation in Bruce’s memory are encouraged to donate to the Price Scholarship Fund at St. Mary in lieu of flowers. Kindly share thoughts and memories with Bruce’s family at www.reynolds-jonkhoff.com

The family of Bruce Warren Price created this Life Tributes page to make it easy to share your memories.

When Bruce Warren Price passed away in the early morning of April...