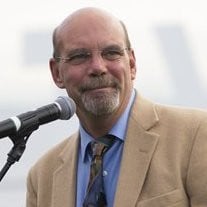 Traverse City - The name Bryan Crough and downtown Traverse City are synonomous. Bryan always said that the merchants were the heart of downtown - we know Bryan was its soul. His vision, keen intellect, commitment to collaboration, and incredible sense of humor helped bring downtown back to life, making it the thriving community center it is today and the envy of every downtown. Bryan passed away suddenly on June 16, 2013. He was born in Salina, Kansas on June 13, 1954. He played bassoon in the high school orchestra and enjoyed playing the piano, the first evidence of his love for the arts. Bryan graduated with a Bachelor’s Degree in English from Marymount College in Salina with 52 students in his class. The college later closed, but Bryan always said that if he needed copies of his transcripts or degree, he could always write the Government Printing Office in Pueblo, Colorado. Bryan moved to Traverse City in 1980 and after a stint with the US Census Bureau, began a career in the arts as Executive Director of the Arts Council and the Old Town Playhouse. In the private sector, Bryan would have been known as a turnaround expert. He solved the financial problems of the Playhouse and put the organization on firm footing. He worked to further integrate the Playhouse into the fabric of the community and to promote it as an important cultural resource. He also found time to act and direct smaller plays in the Studio Theater and triumphed in directing “Steel Magnolias” on the main stage. In 1985, at age 34, Bryan was elected to the Traverse City Commission and after 3 years was appointed Mayor, his goal to further the Commission’s role as a model for good government. In 1990 Bryan accepted the position of Executive Director of the newly merged Downtown Development Authority and Downtown Traverse City Association. He felt this gave him the opportunity to focus on downtown development, volunteerism, historic preservation and city government. The rest, as they say, is history and is exemplified by our vibrant and healthy downtown. There is not a Traverse City landmark or institution that has not felt the impact of Bryan’s passion, commitment, wit and irreverence. Always willing to lend hand, crack a joke, mediate negotiations, emcee an event, champion a cause, regale you with his stories or just listen as only a trusted friend can, Bryan was there. Traverse City would not be what it is today without his brilliant intellect and dynamic vision. Bryan will be missed by the community he embraced and transformed. Bryan is survived by his partner, Todd McMillen; his sister, Mary Kathleen Tranco; her husband, Aniceto; niece, Elizabeth Hayes, her husband John and nephews, Shawn and Patrick, his wife Sheri; two great nephews, Jacob and Ian; and bonus niece Nicole VanNess. He was preceded in death by his parents, Mary Louise and Kenneth Crough. A celebration of Bryan’s life and his legacy will be held on Saturday, June 22st at the Traverse City Opera House at 11 am. In lieu of flowers, donations to the City Opera House for the new dressing room project would be greatly appreciated. Please visit www.cityoperahouse.org to make an online contribution. https://maxtix.whartoncenter.com/scripts/max/20000/maxweb.exe?ACTION=ORDER#anchor143 Arrangements are being handled by Reynolds-Jonkhoff Funeral Home and Cremation Services.

Traverse City - The name Bryan Crough and downtown Traverse City are synonomous. Bryan always said that the merchants were the heart of downtown - we know Bryan was its soul. His vision, keen intellect, commitment to collaboration, and incredible... View Obituary & Service Information

The family of Bryan J. Crough created this Life Tributes page to make it easy to share your memories.