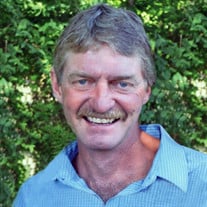 The world lost a beautiful soul July 23, 2020. Buckley Earl Johnson Jr., 55, passed away quietly surrounded by those he loved. He fought a valiant fight to the end, truly in Buckley fashion. Losing Buckley has sent a fracture through so many of our lives, but we take comfort knowing he is at peace. Buckley was a man of faith, who devoted his life to Mother Mary. Buckley was born in Muskegon, April 28, 1965 to parents Buckley Earl Sr. and Patricia Ellen (Campbell), who both preceded him in death. He was the youngest of eight children. He graduated from Muskegon Catholic Central Highschool, and shortly after moved to Traverse City. In in 1981 Buckley Sr. and his son Jeff (Buckley Jr’s. older brother) started Johnson’s Sons Ceramic Tile and Marble. Buckley Jr., joined 2 years later. Buckley was a true artist, able to transform extremely complex materials into literal works of art. He was a master of his craft. He always said “Laying the first tile is the most important part.” Through the years the company had great success, tiling significant places all over Northern Michigan. He even tiled the main atrium at Lake Superior State University. It was clear from an early age (7 years old to be exact) that boating and the water was Buckley’s thing. He saved enough money to buy his own boat, and the obsession took off from there. Throughout his life he would own and operate several vessels, often owning five or more at a time. Buckley could command a boat as though it were part of him. Even though he was skilled and confident he never lost his profound respect for the water. He was a dedicated Brother of The Coast and adhered to their code, as well as maritime law and courtesy. Buckley was attentive and quick to help any vessel in distress. He was the life of the party no matter what, normally an instigator. He brought all kinds of people together and we already miss him deeply for his unforgettable laugh. He loved and cherished his boating family. Late night dinghy races will never be the same that is for sure. After meeting the love of his life in 2002, Buckley married Lisa Beth Oleson in 2012. The couple were married off of Beaver island on their beloved boat, Moonshadow. They traversed many waterways together through the years. They owned and operated the Manatee Landing Motel in Weeki Wachee, Fla., where many fun times were had. The memories they shared were immense and beautiful. Lisa and Buckley were an un-separable pair and were so in love. She cared for and was at Buckley’s side all the way through to the end. Buckley leaves behind his wife and best friend Lisa Beth Oleson-Johnson; son Buckley III; siblings Carol, Paula, Shelly, Jeff, Joe and Deb; sisters-in-law Paula and Marty Oleson; mother and father-in-law Mary Blandin and Gerald “Jerry” Oleson; special niece Mindy who helped care for him; numerous nieces, nephews aunts, uncles and cousins; and his friends who meant the world to him. He was preceded in death by his parents; brother Kim Johnson and his canine companion, Ruby. Mass of Christian Burial will take place 10:00 AM, Saturday, September 19, at Christ the King Catholic Church, 3801 Shore Road, Williamsburg, MI 49690. After Mass, a celebration of life will take place starting at noon, at the Traverse City Elks Lodge, 625 Bay Street, Traverse City, MI 49684. Everyone has a Buckley story so come join us! Buckley and his family are in the care of Reynolds-Jonkhoff Funeral Home, www.reynolds-jonkhoff.com

The world lost a beautiful soul July 23, 2020. Buckley Earl Johnson Jr., 55, passed away quietly surrounded by those he loved. He fought a valiant fight to the end, truly in Buckley fashion. Losing Buckley has sent a fracture through so many... View Obituary & Service Information

The family of Buckley Earl Johnson Jr. created this Life Tributes page to make it easy to share your memories.