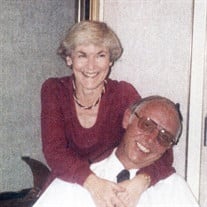 C. W. "Pete" Peters, 79, of Williamsburg, passed away Saturday, May 26, 2018 at his home, in the presence of his wife and in his favorite chair. Pete was born on Tuesday, July 5, 1938 to the late Bernard and Helen (Hoffman) Peters in Rolfe, IA. He graduated from Rolfe High School and then furthered his education at Humboldt Institute in Minneapolis, MN. Pete then served our country as a member of the U.S. Army and Army reserves from 1961 until 1967, being discharged at the rank of Sergeant in 1967. Pete met his wife Evelyn "Evie" (Emery) while the two of them were working for Capital Airlines at Cherry Capital Airport, Traverse City. They married on Saturday, February 4, 1961 at Joan of Arc Church in Minneapolis, MN. They became parents with the birth of their son Matthew, who was born at Ft. Hood, TX while Pete was serving there. Pete began his career working for Capital Airlines and then for over 30 years he worked as a travel agent for MTA Travel in Traverse City. The position offered him the opportunity to travel to many places with his wife and son. Pete attended Williamsburg United Methodist Church, enjoyed reading (especially WWII history), watching any Detroit professional sports teams, working in his yard, Krispie Kreme donuts, making home-made ice cream and old-fashioned Chocolate Sodas for visiting family and was constantly making new acquaintances. Pete is survived by his wife Evie, son Matthew (Tammy) of Rockford, Grandson Andrew (a junior at Michigan Tech) and numerous nieces and nephews. He was preceded in death by his parents, brothers Don and Duane, and sister Elaine. A graveside service with military honors will take place at 3 p.m. Monday, June 4 at Oakwood Cemetery in Traverse City. A time of celebrating Pete's life will take place on Saturday, June 23rd from 1:00 to 5:00 p.m. at Williamsburg United Methodist Church. Should friends so desire, expressions of sympathy may take the form of a donation to the Salvation Army, P. O. Box 5228, Traverse City, MI 49696 or to the Williamsburg United Methodist Church, P. O. Box 40, Williamsburg, MI 49690.

C. W. "Pete" Peters, 79, of Williamsburg, passed away Saturday, May 26, 2018 at his home, in the presence of his wife and in his favorite chair. Pete was born on Tuesday, July 5, 1938 to the late Bernard and Helen (Hoffman) Peters in Rolfe,... View Obituary & Service Information

The family of C. W. "Pete" Peters created this Life Tributes page to make it easy to share your memories.