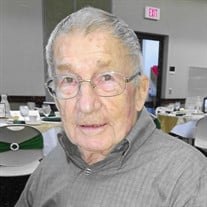 Calvin Appleton Cole September 28, 1927- January 20nd, 2022 Calvin Cole shared his love of nature with everyone. He was born in the quaint town of Fife Lake to Altha and Frederick Bruce Cole. His first job was to keep the wood box full in the one room schoolhouse he attended through 4th grade. His large family spent their early days attending box socials and community picnics. He walked 4 miles (uphill both ways) from his family farm to his school. His parents deeply valued education. In the midst of the Great Depression, when he was 10 years old, his family moved to Traverse City. Cal helped them make ends meet by peddling newspapers, raking yards, and doing odd jobs. He has fond memories of house parties, sleigh rides, ice skating, and playing ball games. In 1946 he served in the U.S. Army Air Corps and was deployed to Japan for WWII reconstruction efforts. Shortly after returning from Japan, he met Betty Marie Grant. They were married on January 31, 1953 and had five children: Andrea, Tom, Janet, Randy, and Calvin. He found his love of working with wood while employed as the sales manager for Brown Lumber Company. He planted trees for all of his grandchildren in his yard on Eighth Street. His grandchildren remember his gentle kindness, watching their trees grow, the smell of his woodshop, and summer bike rides to special places with him. He helped with handiwork at Bethlehem Lutheran Church, and he loved his monthly book club meetings. Being thoughtful and intellectual, he treasured deep conversations with his family and friends. Knowing Cal’s love of working with wood, family members would save trees for him and he would turn them into treasures. He created beautiful memory boxes, furniture and other items for those special in his life. Cal is survived by Betty, his five children, ten grandchildren and six great grandchildren. He left this world having filled his family and friends with more memories and love than could fit in one of his treasured boxes. The memorial service will be held on Sunday, January 23, 2022 at Bethlehem Lutheran Church at 1:00 pm with visitation beginning at 12:30 pm. Interment will take place at the Bethlehem Memorial Garden at a later date. In lieu of flowers, memorial contributions may be directed to Hospice of Michigan.

Calvin Appleton Cole September 28, 1927- January 20nd, 2022 Calvin Cole shared his love of nature with everyone. He was born in the quaint town of Fife Lake to Altha and Frederick Bruce Cole. His first job was to keep the wood box full in... View Obituary & Service Information

The family of Calvin A. Cole created this Life Tributes page to make it easy to share your memories.