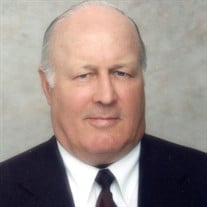 Carl M. Brothers, 81, of Traverse City, passed away September 2, 2019 at his home in the loving care of his family. Carl was born on May 4, 1938 to Claude and Amelia (Ward) Brothers in Baltimore, MD. He grew up in Gamber, MD and graduated from Westminster High School where he was a gifted athlete. Following graduation, Carl entered into the United States Coast Guard Academy in New London, CT. Here he played football under Otto Graham. In 1960, he married Bonnie Marriott in Gamber, MD. Carl served our country for twenty years as a Coast Guard aviator, which had him and his family stationed all across the United States, including a tour as a CO of CGAS Los Angeles. At the end of his time in the service, he earned his Master’s Degree from Pepperdine University. Upon his discharge, he and his wife retired from Los Angeles to Traverse City where he had a successful career as a financial advisor and a cherry farmer. With all of his activities, he found time for community service through Kiwanis for the past 40 years. His passions were his family, friends, football and the Patriots, the Coast Guard, the community and his country. He will be dearly missed by all who knew him. Carl is survived by his wife of 59 years, Bonnie; sons Doug, Mike, Pat, Randy; grandchildren Heather, Shane, Cameron; and his sister Joan. Carl was preceded in death by his parents and siblings; Grace, Marietta, Robert, Jeanette, Luther, Calvin, and Sue. A memorial service honoring Carl’s life will take place at the Presbyterian Church on Friday, September 13, 2019 at 3:00 pm with a visitation one hour prior to the service. Military honors will take place at the church immediately following the service. Carl will be laid to rest in Maryland at a later date. In lieu of flowers the family asks that memorial contributions be directed to; Father Fred Foundation, 826 Hastings St, Traverse City, MI 49686, US Coast Guard Mutual Aid Association, 1005 N. Glebe Road, Suite 220, Arlington, VA 22201. Please share a memory with Carl’s family by visiting his tribute page at www.reynolds-jonkhoff.com. The Reynolds-Jonkhoff Funeral Home and Cremation Services is serving the family.

Carl M. Brothers, 81, of Traverse City, passed away September 2, 2019 at his home in the loving care of his family. Carl was born on May 4, 1938 to Claude and Amelia (Ward) Brothers in Baltimore, MD. He grew up in Gamber, MD and graduated from... View Obituary & Service Information

The family of Carl M. Brothers created this Life Tributes page to make it easy to share your memories.