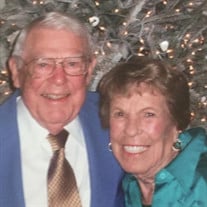 Carol J. Frederick Died July 16, 2015 PHOTO Carol Frederick, 92, of Leland, died peacefully at home from complications of Alzheimer’s Disease. She was born Carol June Mutz, on January 8, 1923 in Lancaster NY., and her parents were John T. Mutz and Martha S. Mutz. Carol was raised in Buffalo, NY. She attended Slippery Rock College in PA and The University of New Mexico. She married James Frederick in 1943. They were married for 72 years and had 1 daughter, Judy Frederick of Leland. In 1952 the family moved to Birmingham, MI where they founded Boride Products, Inc. Initially Carol worked as a secretary/bookkeeper. As the company grew so did her responsibilities. She remained with Boride Products as Vice President until the company was sold to Dow Chemical in 1984. Carol and Jim moved to Leland, year-round, in 1970, where she became active in the community. After retiring they spent their winters in Vero Beach, FL and then moved back to Leland full time in 2012. Carol valued hard work. When she retired she carried that same dedication into playing the games she loved; golf, bridge and “Boat” a game she played with her daughter Judy. She especially loved parties, was a wonderful hostess, and her casseroles became legendary. Most of all she loved her home, friends and family. She was a warm, welcoming and gracious lady who felt fortunate to have made so many close friendships throughout her long and happy life. Carol is survived by her husband, James Frederick, her daughter, Judy Frederick, a nephew, Thomas Stack of Ellenville, NY; and a niece, Kathleen Kitagawa of Tucson, AZ. She was proceeded in death by her sister, Ruth Stack of Myrtle Beach, S.C. and a nephew David Stack of Virginia. A memorial reception for Carol will be announced at a later date. In lieu of flowers, the family is requesting that donations be made to ShareCare of Leelanau, 7401 E. Duck Lake Road, #600, Lake Leelanau, MI 49653 or a charity of choice. Please leave memories of Carol at the Reynolds-Jonkhoff Funeral Home web site: www.reynolds-jonkhoff.com

The family of Carol J. Frederick created this Life Tributes page to make it easy to share your memories.