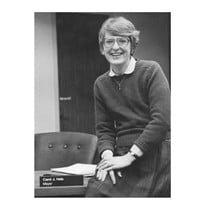 Carol Jean Hale, a strong voice and champion for the history and betterment of Traverse City, passed away Tuesday, January 5, 2021 following a short illness. She was 78. Born in Ann Arbor on July 2, 1942, she was the daughter Evelyn May (Gilson) and Ward Karcher Parr. After having been educated in the Ann Arbor schools, Carol continued her education earning a bachelor’s degree in education and then a master’s degree in Russian History. She married Jan Raymond Hale on Friday, August 21, 1964 in Ann Arbor. He preceded her in death on June 23, 2020. Carol began her teaching career in Livonia and then taught humanities at Traverse City Area Public Schools, retiring in 1998. She was very active in the Traverse City community over the years. She served as a city commissioner for 18 years, served as Mayor of the city in the early 1980's and was an active member of the Board of Directors of the Downtown Development Authority. She had been recognized with many awards over the years, including the Red Rose Rotary Award, the Zonta Community Service Award, the Record Eagle Ten Most Influential People designation and was named Citizen of the Year by the Chamber of Commerce in 1983 and given lifetime achievement awards from both the Michigan Historic Preservation Network and the Grand Traverse Heritage Center. She also served as a director of the Maritime Heritage Alliance, worked to create the formation of the National Historic Districts in Traverse City neighborhoods and served as the chairperson of the Commons Redevelopment Commission. It is rumored that Carol took a stand in front of a bulldozer to stop the demolition of the State Hospital Buildings. She was a strong force in seeing that the properties there were saved and redeveloped to what they have become and continue to become. Surviving Carol are her sons, David Dart (Jena) Hale of Houghton; Matthew Joseph (Lindsey) Hale of Traverse City; her grandchildren, Jason, Mike and Jack Ackerman and Pearl and Erinn Hale. In addition to her parents and husband, Carol was preceded in death by her brother, David George Parr. A time for friends to visit will take place Saturday, August 14, 2021, from 11AM-1PM, at Reynolds-Jonkhoff Funeral Home in Traverse City. There will be a microphone, so please bring a story or memory to share if you wish. Carol had asked that she be remembered through memorial contributions to the Maritime Heritage Alliance, 13268 S. West Bay Shore Dr., Traverse City, M 49684 (online at www.maritimeheritagealliance.org) or to the Inland Seas Education Association, 100 Dame St., #218, Suttons Bay, MI 49682 (online at www.schoolship.org).

Carol Jean Hale, a strong voice and champion for the history and betterment of Traverse City, passed away Tuesday, January 5, 2021 following a short illness. She was 78. Born in Ann Arbor on July 2, 1942, she was the daughter Evelyn May (Gilson)... View Obituary & Service Information

The family of Carol Jean Hale created this Life Tributes page to make it easy to share your memories.

Carol Jean Hale, a strong voice and champion for the history...