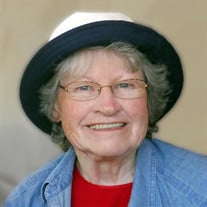 Carol Joy Olsen, 84, of Traverse City, passed away June 22, 2019. Carol was born, in Chicago, October 25, 1934 to parents Roy and Hannah (Skoglund) Chellin. Carol was raised in metropolitan Chicago and remained there until she and her husband, Robert Olsen, married on July 12, 1952; she was 17 at that time. She and Bob enjoyed a wonderful marriage for over 60 years. Shortly after marrying the couple moved to Traverse City where they enjoyed the region, and traveled to various other destinations. Carol and Bob loved a good road-trip. Several years later Carol and Bob welcomed their only child, Joy (Elenbaas). Carol and Bob were early members of West Bay Covenant Church, and remained loyal to that congregation for the rest of their lives. Carol was a woman of faith and dedicated much of her time to church functions and organizations, such as singing alto in the choir. She was not one to pine over future worries, rather trusted God’s plan with a grateful heart; she was mild-mannered and lived in the present. While Carol was not one to make plans, she was a “go-with-the-flow” lady, who loved to attend events. She loved anything involving her granddaughters, from sporting activities to music performances. The last year of her life was spent at Bay Ridge Senior Community in Traverse City, where she made many dear friends and valued connections. The care and welcoming reception there touched Carol and her family deeply. Carol is survived by her daughter Joy (Troy) Elenbaas; granddaughters Hannah and Naomi Elenbaas; as well as other extended family members. She was preceded in death by her parents; beloved husband Robert Olsen; brother Erland Chellin; and sister Marion Edwards. A memorial service celebrating Carol's life will take place 1PM Friday, July 5, 2019, at West Bay Covenant Church, 12720 S. West Bay Shore Drive, Traverse City, MI 49684, with Pastor Kent Anderson serving as officiant. Carol will be laid to rest in Grand Traverse Memorial Gardens at a later date. Please direct memorial contributions to West Bay Covenant Church. Carol and her family are being cared for by Reynolds-Jonkhoff Funeral Home and Cremation Services.

Carol Joy Olsen, 84, of Traverse City, passed away June 22, 2019. Carol was born, in Chicago, October 25, 1934 to parents Roy and Hannah (Skoglund) Chellin. Carol was raised in metropolitan Chicago and remained there until she and her husband,... View Obituary & Service Information

The family of Carol Joy Olsen created this Life Tributes page to make it easy to share your memories.