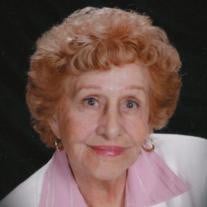 Traverse City-Carol Evelyn Stanley, 89, of Traverse City, died Thursday morning, April 12, 2012, at Munson Medical Center. Born October 18, 1922, in Boyne City, Michigan, she was the daughter of the late DeWitt Edgar and Grace Willow(Cheesebro)Calkins. On May 2, 1941, in Pontiac, she married the love of her life, Ernest P. Stanley, Jr., who preceded her in death on March 15, 2004. During WWII, Carol worked as a welder at the tank plant in Flint. Afterward she was an Arthur Murray dance teacher. She enjoyed traveling with her husband and children during his 25-year military career. Carol was a Cub Scout Den Mother in Olympia, Washington. In France she learned to play bridge, volunteered as a Red Cross Gray Lady, and was a teacher’s substitute. She attended a year of college in Belton, Texas. She bluffed her way into a bookkeeping job in Lansing with no prior experience. In Okinawa she took her first painting class. In Traverse She was active in little theater, and started her lifelong mentoring of girls and younger women in Traverse City. She was president of the Officer’s Wives Club in Germany. While living in Waterford, she worked as an Associate Broker for Evans & Associates. Throughout her career, she received both the N.O.C.B.R. and the Michigan Realtor-Associate-of-the-Year awards and the Michigan Women’s Council of Realtors’ Woman-of-the-Year award along with various other citations. She was President of the North Oakland County Board of Realtors and of the Michigan Chapter Women’s Council of Realtors. Her interest in her chosen field led her to serve on the Board of Directors of the state and national real estate associations. She also was an Oakland County Park Commissioner and an active member of the Oakland County Republicans. After returning to Traverse City in 1995, she relished sharing her time and talents with others as she volunteered at Munson Medical Center, Traverse City Visitors Center, and the Old Town Play House. Carol was a member of Unity Church of Traverse City, where she served as an usher, a member of the Angels, and a Chaplain Emeritus. Carol will be fondly remembered for her fire and spirited outgoing personality, her willingness to help others, and her ability to voice her opinion in a loving way. Her determination to help others was evident throughout her life, as she was always taking someone under her wing, guiding them with love and understanding, and offering wisdom. She loved her husband and children passionately and always inspired them to do their best. She was a gifted artist who enjoyed playing bridge, working crossword puzzles with an ink pen, and grooming her flower gardens. She survived by her four children, Ernest (Carol Tamasiunas) Stanley III of White Lake; Sharon (David) Heitzman of Saint Paul, MN; Jeffrey (Amy) Stanley of Honey Creek, IA; and Terry (Patti) Stanley of Windermere, FL; four granddaughters; five grandsons; one great-grandson; and one brother, Larry Calkins of Burton. In addition to her husband, she was also preceded in death by three siblings, Adrienne Lowe, Alden DeWitt Calkins, and Mary Ellen Roven. A Celebration of Life Service will be held at the Unity Church of Traverse City, on Saturday, May 12, 2012, at 11:00 A.M., with visitation one hour prior to the service. Cremation has taken place. In remembrance of Carol, memorial contributions may be directed to the Unity Church of Traverse City or to the Father Fred Foundation. Kindly share your memories with the family on their online guestbook at www.reynolds-jonkhoff.com Arrangements were made with the Reynolds-Jonkhoff Funeral Home and Cremation Services.

The family of Carol Stanley created this Life Tributes page to make it easy to share your memories.