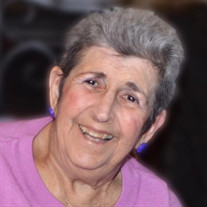 Traverse City - Carol Jean Triltsch, 74, of Traverse City, passed away on August 18, 2015, at Munson Medical Center with her family by her side. Carol was born June 7, 1941 to the late Clayton and Dorothy (Anderson) Johnson in Detroit, MI. On September 12, 1959 she married Gerald Triltsch in a service in Detroit, MI. Carol worked as a x-ray technician in both Westland and Dearborn, MI. They moved to the Lake Ann area where they retired in 1990. She enjoyed spending time with her grandchildren. She was a member of the Presbyterian Church in Traverse City, the Elks, and the Parkinson’s Support Group. She and Jerry enjoyed spending time in Green Valley, AZ where they spent many winters. She had an extensive antique glassware collection, enjoyed working on the family tree and fabric painting. She was preceded in death by her parents Clayton and Dorothy. Carol is survived by her husband, Jerry of Traverse City; her sons, Glen Triltsch of Westland and Lee (Yvette) Triltsch of Fenton; daughter Marla (David) Bidwell of Traverse City; brother, Gary Johnson of Ft Lauderdale; sister, Sherry (Edward) McNamara of Traverse City; grandchildren Zachary Triltsch, Jared Triltsch, Olivia Triltsch, Brianna Bidwell, Corey Bidwell and Brooke Bidwell. A visitation for Carol will be held at Reynolds-Jonkhoff Funeral Home on Sunday, August 23, 2015 from 4:00 pm to 6:00 pm. A funeral service for Carol will take place at Reynolds-Jonkhoff Funeral Home on Monday, August 24, 2015 at 11 am with visitation being held at 10 am. Pastor Homer Nye will officiate the service. Burial will be at the Lake Ann Cemetery. In lieu of flowers, a memorial contribution in Carol’s name can be made to Parkinson’s Support Group, c/o Parkinson’s Network North, P.O. Box 5734, Traverse City, MI 49696-5734. Please share your thoughts and memories of Carol by visiting her online guestbook at www.reynolds-jonkhoff.com The family is being cared for by Reynolds-Jonkhoff Funeral Home and Cremation Services.

Traverse City - Carol Jean Triltsch, 74, of Traverse City, passed away on August 18, 2015, at Munson Medical Center with her family by her side. Carol was born June 7, 1941 to the late Clayton and Dorothy (Anderson) Johnson in Detroit, MI.... View Obituary & Service Information

The family of Carol Jean Triltsch created this Life Tributes page to make it easy to share your memories.