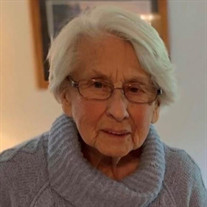 Caroline Violet Leary, 89, of Traverse City passed away peacefully on Monday, September 27 2021. Caroline was born in Detroit, Michigan on June 1, 1932 to James and Caroline (Kirby) Barry. In May of 1955 Caroline was on a bowling league where she met Robert Leary and three months later, they were married. They were married 65 beautiful years and their love for each other was everlasting! Caroline and Robert had three children, Dorothy, Robert and Ann Marie. In Carol’s spare time she loved to be out in the yard gardening, making crafts and filling out crossword puzzles. Caroline’s purpose of life was caring for others. She volunteered at her children’s school and was the PTA president. She was also a stay-at-home Mom with all three of their children. She took so much pride in helping others and being a great wife, mother and friend. Caroline is survived by her daughters; Dorothy Leary and Ann Marie (Eric) Guldner, and five grandchildren, Crystal (Jason) Wilson, Megan Curto (Mark Hamilton), Sarah (Jon) Popowich, Chelsea Leary (Adam Whitaker) and Jonah Guldner. Also surviving are five great-grandchildren, Gavin, Grant and Gracelyn Hamilton and Reese and Rosie Popowich. Caroline was preceded in death by her Mom and Dad, Caroline and James Barry; sisters Jane Tate, and Dorothy Barry, brother James Barry; son Robert Leary and husband Robert Leary. A funeral service honoring Carol will take place at 3:00 p.m., with visitation starting at 1:30 p.m., on Saturday, October 9, 2021at the Reynolds-Jonkhoff Funeral Home, 305 Sixth St., Traverse City, Michigan 49684. Pastor Chris Lane will officiate. Burial will follow at Grand Traverse Memorial Gardens. Donations may be made in Caroline’s name to the American Cancer Society. Please feel free to share your thoughts and memories with Caroline’s family at her tribute page at www.reynolds-jonkhoff.com. The family is being cared for by the Reynolds-Jonkhoff Funeral Home and Cremation Services.

Caroline Violet Leary, 89, of Traverse City passed away peacefully on Monday, September 27 2021. Caroline was born in Detroit, Michigan on June 1, 1932 to James and Caroline (Kirby) Barry. In May of 1955 Caroline was on a bowling league where... View Obituary & Service Information

The family of Caroline V. Leary created this Life Tributes page to make it easy to share your memories.