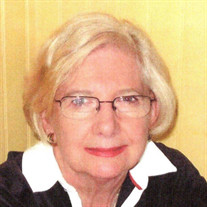 Traverse City – Carolyn “Carrie” Oros, 80, of Old Mission Peninsula, passed away peacefully on Thursday, March 24, 2022 at the Medilodge GTC Skilled Nursing Home, after previously receiving the ceremony of the Catholic last rights. She was surrounded by her husband, John and family relatives. She died after a valiant six-and-a-half-year battle with Alzheimer’s Dementia at the Willow Cottage assisted living, G.T. Pavilions. Carrie was born April 10, 1941 in Dearborn, Michigan to the late Florence and Joseph Korte. She was happy and proud to have been part of the second year graduating class at the Edsel Ford High School in Dearborn. She was a very active and excellent athlete in field hockey and basketball, and especially in running events. She won an individual gold medal in her first trial at the event. Following graduation, Carrie began her work career at the Cadillac Division, General Motors Corporation, in Detroit, where she was employed in various administrative positions. During this period, she married her first husband, Paul Hecht, a former high school classmate, with whom she shared the birth of her one and only son, Michael. Subsequently, she later married her second husband, John Oros. They wed on July 24, 1981, in Dearborn. During the early years of their marriage, John and Carrie began traveling extensively to visit Delaware (where John was born) and many other East Coast states, from Maine to Florida, to familiarize her with different areas of the U.S., since she was a mostly mid-western “Motown lady.” Additionally, she and John followed her son Mike’s various sporting activities from the time he was at Divine Child High School, and later during his four-year football experience at Ferris State University. Carolyn was proud of Mike’s 25-year career as a public safety officer, in both police and fire service in Kalamazoo. He married his college mate, Karen, in Saginaw, and welcomed the birth of their two sons, Nick and Noah. Thereafter, Carrie and John continued their travels downstate to follow their grandkids’ sporting events at Portage Northern High School. After John’s early medical disability retirement in 1988 from Ford Motor Company, the couple relocated to their final home on Old Mission Peninsula in 1990, located on the beautiful shores of West Grand Traverse Bay. During their forty-year marriage, Carrie loved and enjoyed her interests of traveling, dancing, shopping, fashion, movies, her dog Spencer, and especially her skills of decorating a beautiful home and gardens. Carrie should best be remembered by all as a sweet, loving and caring individual, who lived life to its fullest. She was loved and admired by all whom she met, just like her dear mother, Florence. She was totally devoted to her family and various friends, taking great delight in sharing all the annual holidays throughout the years. Carrie endured many years with Alzheimer’s with determination and grace, coupled with the desire to help other patients with friendship and goodwill, all the while struggling with her own anxieties and delusional disorders, including her last years when she lost the ability to speak. She loved the weekly Sunday brunches at Amical with John, sitting by the bay watching seagulls and boats go by while listening to jazz on the car radio. She was still able to enjoy spring and the colors of autumn. Carrie is survived by her husband of 40 years, John; her son Michael (Karen); grandsons Nick and Noah; sister Mary; aunt Mabel; cousins Marilyn and Elaine; friends and “soulmates” Judith and Brian and numerous nephews and nieces. Carrie was preceded in death by her parents; brother Joe (Kathy); cousin Janet; grandmother Lillie; aunts Irene and Lily and uncle Gordon. The John Oros family would like to offer thanks and appreciation for the professional and personal assistance provided by the working staffs at the Willow Cottage, G.T. Pavilions, Comfort Keepers, Medilodge of GTC Skilled Nursing Home, Hospice of Michigan, the NW Area Agency on Aging, the legal offices of Kish and Company and CVLAP of Traverse City and Gaylord. A memoriam and celebration of life will take place on Friday, May 27, 2022, beginning at 9:30 AM, at St. Joseph Catholic Church, 12675 Center Road, Traverse City, MI 49686, including a Mass of Christian Burial, concluding with a luncheon in St. Joseph’s Parish Hall. Cremation Services have been concluded by the attending Reynolds-Jonkhoff Funeral Home. Please visit Carrie’s tribute page at, www.reynolds-jonkhoff.com to share memories and condolences. In lieu of flowers, kindly direct memorial contributions to the Father Fred Foundation, Traverse City, MI.

The family of Carolyn Oros created this Life Tributes page to make it easy to share your memories.