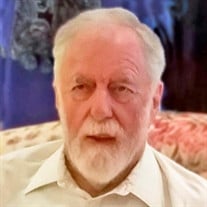 It is with heavy hearts that we say goodbye to our father, stepfather, grandfather and great grandfather Carrol C. Lock. He left us on September 17, 2021. We had just celebrated his 93rd birthday. Carrol was born to Wiltmer William and Georgia Marguerite Lock on September 1, 1928 in Detroit, Michigan. He graduated from Michigan State University with a BS and MA in Business. Following his graduation, he met and married Cynthia Taylor Blake in June, 1950 in Detroit, Michigan. Carrol’s pride and joys were his 10 children, who arrived in rapid succession during the 1950’s and 1960’s. His children have many fond memories of camping trips in the VW Westphalia and tent trailer across eastern Canada, NY, FL, the Smokey Mountains, and across the western US. Carrol also enjoyed taking his family to the Hiawatha Club in northern Michigan where fishing, swimming and beach excursions were the favorites. He loved travelling, cars and motorcycles and enjoyed long drives with his family. He also liked visiting museums (he could spend all day in the smallest of museums especially if they were about history or military topics) and he also enjoyed researching the Civil War and visiting sites. He served as a Lieutenant in the US Army in Kaiserslautern, Germany from 1951-53. Carrol worked for many years as the Assistant Manager for the City of Grosse Pointe Farms, MI . In 1982 Carrol married Barbara (Bonnie) Thompson and became a stepfather to two more children. Carrol, with Bonnie, in retirement enjoyed many travels around the world, spending 6 weeks visiting South America, many travels to Europe as well as trips with the Miata Club and activities in and around Traverse City, where they lived after retiring. They also adopted Bud, a feisty dog that they doted on. They very much enjoyed hosting large family reunions and much fun was had by all at these big family gatherings. Carrol was a long-term volunteer with meals on wheels in Traverse City. He enjoyed delivering the meals and having a visit with the seniors on his route. Carrol and Bonnie were members of the First Congregational Church in Traverse City, Michigan. Carrol was predeceased by his parents, his first wife Cynthia in 2018, his wife Bonnie in 2020, his son Douglas in 1964, and his son Jonathon in 2016. He leaves to mourn his children Susan Marcus (Jay), Patricia Atkins (Fred), Christine Kageff (Jerry), David Lock (Maria), Timothy Lock (Sarah Innes), Richard Lock (MaryBeth), Daniel Lock (Chellie), Martha Lock, Tracy Thompson and Don Thompson (Angela Henley), 16 grandchildren and 11 great grandchildren. Carrol has been cremated with his ashes soon to be joined with Bonnie’s in their final resting place at the First Congregational Church in Traverse City. A memorial will be at the First Congregational Church in Traverse City at a date to be announced.

It is with heavy hearts that we say goodbye to our father, stepfather, grandfather and great grandfather Carrol C. Lock. He left us on September 17, 2021. We had just celebrated his 93rd birthday. Carrol was born to Wiltmer William and Georgia... View Obituary & Service Information

The family of Carrol Lock created this Life Tributes page to make it easy to share your memories.

It is with heavy hearts that we say goodbye to our father, stepfather,...