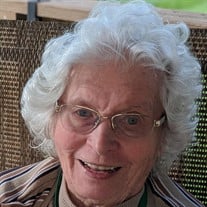 Casimiera “Kay” (Groszek) O’Brien, 94, of Richmond Heights, OH, formerly of Traverse City, passed away March 26, 2021. Kay was born on April 18, 1926, to the late Walter and Mary (Grudzien) Brzyski in Ksiaz Lublin, Poland. Kay graduated from Holy Family Academy in 1944, and attended Commercial College where she studied to become a bookkeeper and secretary. She was proud of her first job at Bruns and Collins Wholesale and then as the manager of Northwestern College’s Bookstore where she finished her career. Kay married Joseph Groszek on December 26, 1947, and had five children. Joseph passed away in 1985. After four years of widowhood, Kay married Louis O’Brien. Together they celebrated twenty-three years of marriage, enjoying spending time with both families. Kay loved cooking some of her favorite Polish dishes that she shared with family and friends especially during the Christmas and Easter holidays. She was very proud of her American citizenship. Kay was sworn in as an American citizen on June 7, 1949, in Chicago with Ann Groszek Callan and Frank Piszczor as her sponsors. She voted in every election as she truly appreciated her new country and its rights and privileges. Kay was an active community volunteer and devout Catholic. She was very involved at Immaculate Conception Church and worked at the Food Pantry, as an Eucharistic Minister, and as a volunteer at funeral luncheons. She was particularly devoted to the Blessed Virgin and prayed the rosary every day. She also was active as a member of the Traverse City Women’s Club, the VFW Auxiliary, a Girl Scout leader and a Cub Scout Den Mother. Kay also loved her Soup Group and to travel, sew, knit, crochet, play bridge and board games. She treasured spending time with her grandchildren and great grandchildren. Kay will be missed for her love, her passion and zest for life, her unwavering faith and her generosity, not to mention being a wonderful mother, grandmother, great grandmother, sister, and friend. Kay is survived by children: Suzanne (Jeff) Halm, Massillon, OH; Nancy Groszek, Anchorage, AK; Donald (Sue) Groszek, Highland Heights, OH; Diane (Mark Sternberg) Groszek Warren, PA; step children; Dave (Linda) O’Brien, Sparks, NV; Susan (Alberto) Menendez, Almont, MI; Patricia O’Brien, Longmont, CO; Joe O’Brien, Billerica, MA; Kathleen Schaden, Boulder, CO; and Dan (Cheryl) O’Brien, Independence, OH. Grandchildren: Bradley Halm, and Emily Halm Jenkins, Joseph, Amanda and Anne Groszek, and Jesse and Michael Groszek Sternberg. Step grandchildren; James and Jessica O’Brien, Luis O'Brien and Marcie Morehead, Jeremy O’Brien, Jenny, Shawn and Christina O’Brien, Scott and Danielle Schaden and Caitlin, Megan and Brendan O’Brien. She is also survived by 9 great grandchildren and 10 step great grandchildren, as well as her brother Ted (Margaret Brennan) Brzyski. She is preceded in death by her first husband Joseph Groszek, her husband Louis O’Brien, her parents, daughter Peggy Groszek, sisters Celia (John) Brzyski Budrick and Charlotte Brzyski Stanek, and her step sons Richard and Stephen O’Brien. Visitation will take place Friday, May 7, 2021, at the Reynolds Jonkhoff Funeral Home from 5-7pm with a rosary being prayed at 7pm. A Funeral Mass will take place on Saturday, May 8, 2021, at 11:00am at the Immaculate Conception Church with visitation from 10am until the beginning of service. Kay’s final resting place will be Oakwood Catholic Cemetery. Please share your thoughts with the family at www.reynolds-jonkhoff.com. Contributions in Kay's memory may be made to the Boy Scouts of America, Girl Scout - Campership, or the Immaculate Conception Food Pantry. Kay and her family are being cared for by the Reynolds Jonkhoff Funeral Home.

The family of Casimiera "Kay" (Groszek) O'Brien created this Life Tributes page to make it easy to share your memories.