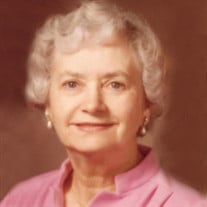 Catherine Pauline Johnson, 103, passed away Wednesday, February 15, 2017 at Tendercare-Traverse City where she has resided for the last 13 years. Catherine was born to the late Jay and Bertha (Houseman) Lynn on November 25, 1913 near Hartford City, Indiana. She was the eldest of eight children and graduated from Kokomo High School of Indiana in 1933. She married the late Bill Johnson on May 12, 1935 in Kokomo. They moved from Marion, Indiana to Traverse City in 1943. After moving north she became a member of the First Christian Church shortly after arriving in Traverse City. Proudly she was an active church member for over 50 years. Catherine worked for the Traverse City Public Schools for over 19 years as a food service cashier. In her younger years Catherine and Bill enjoyed traveling to many different states including some of Canada and Puerto Rico. She enjoyed card games and played in several bridge groups for many years. Surviving Catherine are her children, Phyllis Johnson of Mt. Pleasant, SC, Ronald (Leann) Johnson of Traverse City; grandchildren Pamela (Mike) Hughes of Big Rapids, MI, Lori (Bill) Johnson of Dallas, TX, Russell (Mara) Johnson of Barcelona Spain; and one great grandchild Preston Hughes of Big Rapids. Catherine is preceded in death by her parents; husband Bill; grandson Matt Johnson; siblings, James, Neil, Jay, Benny, George, Rex and Betty. Funeral services will be held at 11am on Tuesday, February 21, 2017 at the Reynolds-Jonkhoff Funeral Home. Burial will take place at the Grand Traverse Memorial Gardens. Memorial contributions may be directed to a Charity of One’s Choice. Kindly share thoughts and memories with Catherine’s family at www.reynolds-jonkhoff.com

Catherine Pauline Johnson, 103, passed away Wednesday, February 15, 2017 at Tendercare-Traverse City where she has resided for the last 13 years. Catherine was born to the late Jay and Bertha (Houseman) Lynn on November 25, 1913 near Hartford... View Obituary & Service Information

The family of Catherine P. Johnson created this Life Tributes page to make it easy to share your memories.