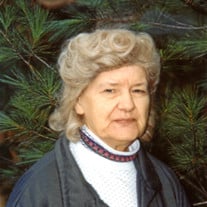 Our beautiful mother Cecelia Pauline Beddow, 96, passed away on December 6, 2016 in Rapid City. She was born September 27, 1920 in Flint, MI. She attended Baker Elementary and Denby High School in Detroit. A championship speller, she was the 7th Grade Champion in the Detroit News Spelling Bee in 1934. She was a member of the “Greatest Generation” whose men went off to war and women went to work. As a young woman she worked for such Detroit Icons as J.L. Hudsons, Parke-Davis and was a supervisor at Packard Motors during WWII. She was able to afford two new cars which were converted to taxicabs and became part of the foundation of the Southfield Cab Company. She also helped her parents manage Bezak’s Friendly Service Station at 11 MI and Lahser Rd. in Southfield. It was there she met a handsome, decorated Air Force Veteran of WWII, John Beddow. They married and had two daughters and made their first home in Franklin Village. In 1957 they moved to Charlevoix and bought a farm on Marion Center Rd. Today Charlevoix High School sits on a portion of that property. On the large field south of the school is where she would watch the girls play with their beloved dog King. She always had a big garden and loved flowers. The land may still have some of her beautiful peonies today. After her divorce in 1967 she and the girls moved to Southfield and later to a home on Long Lake in Presque Isle County. There they enjoyed beautiful sunsets and lived out the adage “if you’re lucky enough to live on a lake, you’re lucky enough”. In her later years she lived in another beautiful spot overlooking the Rapid River. She loved going on road trips, exploring the backroads and hidden gems of Michigan. She often quoted the State slogan “If you seek a pleasant peninsula look about you”. She was preceded in death by her parents Frank and Martha (Kotwicki) Bezak and her brothers Joseph, Richard, and Raymond. She is survived by her daughters Barbara (Gregory Cameron) Beddow of Iowa and Charlotte (Patrick) Walters of Rapid City and her brother George Bezak of Presque Isle. As a voracious reader and lifelong learner she would be very happy if you gave a child a book in her memory. Private family services will take place at the Reynolds-Jonkhoff Funeral Home. Burial will take place at the Mount Calvary Cemetery in Roger City. Condolences may be sent to PO Box 154 Rapid City, MI 49676.

Our beautiful mother Cecelia Pauline Beddow, 96, passed away on December 6, 2016 in Rapid City. She was born September 27, 1920 in Flint, MI. She attended Baker Elementary and Denby High School in Detroit. A championship speller, she was the... View Obituary & Service Information

The family of Cecelia Pauline Beddow created this Life Tributes page to make it easy to share your memories.