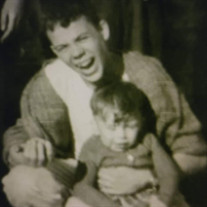 Dear Judy, Dementia has been humbling. I have almost ninety years of memories that I wanted to share with you and the many wonderful and caring people at our nursing home, but I couldn&#8217;t. I was born during the depression in Chicago on... View Obituary & Service Information

The family of Charles Ernest Ailsworth Jr. created this Life Tributes page to make it easy to share your memories.

Dear Judy,
Dementia has been humbling. I have almost ninety...