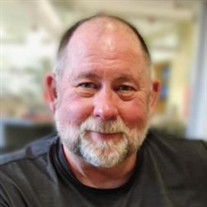 Charles “Charley” Alton Dodge, 68, passed away early Thursday morning April 8th after a long battle with cancer. Charley was born on February 14th, 1953 to Glendine and Alton Dodge in St. Clair Shores, Michigan. He graduated in 1971 from Edsel Ford High School in Dearborn, Michigan. After high school, he worked for Ford Motor Company for several years while earning his bachelor’s degree in business from Wayne State University. From there he followed the footsteps of his father and grandfather and entered into the world of trucking and transportation. He became an owner/operator for CF Arrowhead in Detroit, MI where he met his wife Donna. After marriage, Charley moved his wife and four new daughters to the Torch Lake area where he spent many of his childhood summers swimming and boating, as well as many winters snowmobiling. Charley and Donna purchased and ran the Harbor Café in Elk Rapids from 1987 until 1999 where Charley made a name for himself serving-up his famous omelets. He was a hard worker who always had to be busy. As a member of the Elk Rapids Lion’s Club you would find him serving hot dogs at Harbor Days and sponsoring several community suppers for families of Elk Rapids during the holidays. After tiring of the restaurant business Charley moved to Traverse City and pursued his license in Real Estate Appraising. He established himself as a respected, well sought-after appraiser. Charley was a loving husband and devoted dad. His wife and four girls were his world. Those who knew him knew him as a gentle giant and an intelligent, well spoken kind man. He is survived by his wife, Donna of 35 years, children, Stephany Terry, Stacy Howe, Shelly Durkin, Sherry Coleman; grandchildren Patrick Moritz, Lauren Moritz, Kelly Howe, Macey Howe and Tristan Durkin. A memorial service honoring Charley’s life will be held at New Hope Community church at a later date early this summer. The family is grateful for the incredible care given along the way by so many. The family would especially like to thank his care Pastor and friend, Tim, his oncologist, Andy, who treated him more like a father than a patient, the medical team on 8 East at U of M hospital, Chris and Mary at the Ann Arbor Mennonite Guest Home, Munson Hospice House of Traverse City, Reynolds-Jonkhoff Funeral Home and everyone who is currently caring for his family during this difficult time. In lieu of flowers if you would like to make a donation in Charley’s name, please send to New Hope Community Church or to Cowell Cancer Center. Please visit www.reynolds-jonkhoff.com to share your memories and condolences with the family.

The family of Charles "Charley" Dodge created this Life Tributes page to make it easy to share your memories.