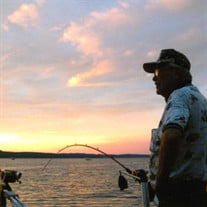 Charles “Chuck” A. Cavitch, 82, of Traverse City, MI passed away peacefully in Bonita Springs, FL on October 30, 2020. Chuck was born on December 2, 1937 in Traverse City, to the late Lawrence and Alberta (McCaw) Cavitch. After honorably serving our country in the United States Army, he married the late Donna M. Dobson on September 26, 1959. Together they raised their daughter, Sherry. Chuck enjoyed being active and socializing. He was a Past President and active 60 year member of the Fraternal Order of the Eagles #383. He was also a member of the American Military League, Moose Club, Elks Club, and a Veterans of Foreign Wars life member. “He had a knack for making friends wherever he went,” said his granddaughter, Heather Davis of Traverse City. “He enjoyed being the center of attention. Whether it was having the silliest Halloween costume, the most over the top lawn full of Christmas lights and inflatable decorations, or growing the tallest tomato plants I have ever seen; my grandpa made sure he would never be forgotten.” Chuck loved spending time with his family and lifelong friends at his deer camp in Marilla, playing cards with friends, and golfing. He enjoyed afternoon naps and was a lover of sweets, especially ice cream. Chuck was known by many of his lifelong friends as “lucky Chucky.” This nickname may have been because he never failed to nab the first and largest buck at deer camp (and was always the one to insist on starting a buck pool) or because he had not one, but two hole-in-ones in his lifetime. The “luck” also seem to follow him during card games, shuffleboard tournaments, and trips to the casino. Surviving Chuck is his daughter Sherry (Tim) Irwin, granddaughter Heather (Nate) Davis, significant other and best friend of 19 years, Carol Martek. Chuck is preceded in death by his parents and his beloved wife Donna in 1998. According to his last wishes, no formal funeral services will be held. Burial has taken place at the Grand Traverse Memorial Gardens. A celebration of life will be held at the Traverse City Eagles Club at a later date. All who knew Chuck will be welcome to come and share stories and remembrances. “It takes a minute to find a special person, an hour to appreciate them, a day to love them, but it takes an entire lifetime to forget them.” Chuck’s memory will live on through those of us that were lucky enough to know him. In lieu of flowers, the family asks that you celebrate Chuck’s life in your own way. Eating a dish of your favorite ice cream or raising a glass of your favorite drink in his memory would be quite appropriate. The family is being cared for by the Reynolds-Jonkhoff Funeral Home and Cremation Services.

The family of Charles "Chuck" A. Cavitch created this Life Tributes page to make it easy to share your memories.