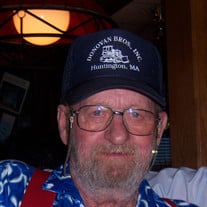 A pillar and titan in Leelanau County for over half a century, Charles J Flaska, age 89, passed away peacefully Tuesday evening, March 6, 2018. He was born on July 13, 1928 at a home in Maple City, the son of Delbert and Tillie (King) Flaska. A respected man in the community known for being a hard worker and a loving parent, who loved to joke around with all, his impact on many and accomplishments will live on in his legacy. Notably he will be remembered for his coined phrase “my hobby is to work 8 days a week!” Charlie married Marilyn Morrison (Grawn) on Valentine’s Day, in 1950, in Traverse City and forever he was her cupid. They recently celebrated their long loving relationship with their 68th wedding anniversary. Charlie started Leelanau Redi Mix Company in 1977, with his wife Marilyn and children, and recently celebrated its 40th anniversary of the business. The Redi Mix is a huge fixture in Leelanau County and Northwestern Michigan area where it has grown from Charlie, Marilyn and family members to as high as 60 employees. Charlie’s hard work, determination and masterful abilities as the jack of all trades has steer headed the company into great success over time. The company has employed over a thousand people in the 41 years of operation. The company has supported many local functions, groups, activities and charities that created the good will both in and out of the Leelanau County Community. Before the Redi Mix, Charlie grew up in Maple City, started his own construction and excavation company (in the 1950’s) at an early age and built many area quality homes that are still standing and solid today. He spent his winters traveling with his family to Florida to work in the masonry trades. In the summer, with land purchased from family, he became a cherry farmer while still doing his construction business, again acknowledging his hobby of 8 days in a work week. He became one of the first cherry farmers with a shaker that shook the cherries off trees and this led him to shaking cherries for other farmers in the area. Charlie was known as a relentless worker who provided well for his family. When the Redi Mix opened, he worked it by day and did cherry farming by night. If there was an hour to spare he would be working. Charlie with his wife Marilyn used their success to become large land owners, which includes providing many rental properties to hundreds of people through out the years in Leelanau County and the surrounding area. When Charlie wasn’t working, at an early age he loved to be on the lake boating and with his family at his lake lot on Lime Lake. He was an avid collector of antiques, old cars, and many other things. He was certainly a bargain hunter for all his treasures. He became a charter member and avid supporter of the Cedar Maple City Lions Club and was one of only two still living until his death. In his later years, Charlie worked at the business and never officially retired from Redi Mix, but developed a hobby going to garage sales and auctions with his devoted side kick Chelsea, his dog whom he cherished to the end. He also became a big traveler, going on cruises to the Caribbean, visiting Europe, or touring the United States and Canada. When their youngest daughter was diagnosed with cancer, they took 26 family members on a Caribbean Cruise. After their daughter’s death, Charles and Marilyn took 21 family members on a similar Caribbean experience in memory and honor of her. He tuned into Fox News daily to catch all the world’s happenings and planned for months the fireworks display he would put together for the 4th of July and the summer family reunions. Charlie and Marilyn purchased a home in Cape Coral, Florida in the 1980’s where they would reside for the winters and welcome the family to come visit. Charlie is survived by his beloved wife Marilyn, children; Betty (Ray) Warnes, Scott (JoAnn) of Cedar, Jerry (Michele Umlor) of Lake Ann, Kathi (Rob) Thoreson and Robert (Joni) of Lake Ann, sister Gladys Newman, grandchildren; Kimberly (Skip), Trevor (Shelly), Carrie (Derek), Tricia (Dave), Corey, Brooke, Jolene (Charles), Cooper (Ashley), Colby, Charlie, Cameron and Riley. Also surviving are great grandchildren; Blake, Gage, CJ, Hunter, Drew, Sadie, Mya, Hope, Abby, Owen and Nash as well as his loved four legged companion Chelsea. He was preceded in death by his parents, his daughter Laurel, sister Irene Karns and brothers; Edward, Raymond, Glen and Gene. A visitation will take place Sunday March 11, 2017 at the Reynolds-Jonkhoff Funeral Home from 4-7pm.A funeral service will take place on Monday March 12, 2018 also at the funeral home at 11:00am with visitation one hour prior. Please visit www.reynolds-jonkhoff.com to share condolences and memories on Charlie’s tribute page. Those wishing an expression of sympathy are asked to consider the Cedar Maple City Lions Club. The family is being cared for and served by the Reynolds-Jonkhoff Funeral Home.

A pillar and titan in Leelanau County for over half a century, Charles J Flaska, age 89, passed away peacefully Tuesday evening, March 6, 2018. He was born on July 13, 1928 at a home in Maple City, the son of Delbert and Tillie (King) Flaska.... View Obituary & Service Information

The family of Charles Flaska created this Life Tributes page to make it easy to share your memories.

A pillar and titan in Leelanau County for over half a century,...