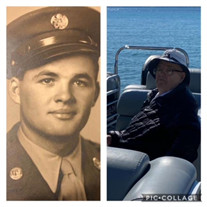 TRAVERSE CITY - Charles Robert Hale, 95, of Traverse City, MI, formerly of Borger, TX, died on January 9, 2021. Chuck was born in Dewey, Oklahoma on October 20, 1925. He was the son of the late Silas and Lillie Mae Hale. Chuck grew up in Dewey, Oklahoma where he was Class President and Captain of the basketball team at Dewey High School. He married Raye Jean Hale in 1947, and they remained married until her death in 2000. He served in WWII where he was an airplane and engine gunner. He then worked for Phillips Petroleum Company until his retirement. Anyone who ever met Chuck, loved his intelligence, his quick wit and his compassion. Chuck loved sports and was very competitive. He loved watching the Dallas Cowboys. He was an avid golfer and bowler. Twice, he shot less than his age while golfing and also was very proud of his hole in one. In his later years, he loved to be on the boat, fishing on East Bay with family and friends just hoping to “catch the big one”. Chuck always thought of others. He was a man of great character. He loved his wife, he took care of his family, he served his country. He will be deeply missed! He is survived by his brother, Donald Hale of Bartlesville, OK, his daughters, Carla Hale Powell of Greenwood, SC, BB Hale Brick (Terry Brick) of Traverse City, MI: and son, Richard Charles Hale of Amarillo, TX. His grandchildren, Kelly Beaurain of Chicago, IL, Sara Powell of Greenwood, SC, Timothy Brick of Traverse City, MI, Peter Brick of Traverse City, MI, Halee Brick of Tucson, AZ, Audra Ortiz of Amarillo, TX and Madison Hale of San Antonio, TX. He also is survived by six great grandchildren and several nieces and nephews. He is preceded in death by his beloved wife, Raye Jean Hale. He is also preceded in death by his sisters, Opal Caffey, Daisy Goforth and his twin, Charlotte Thaxton. There will be a private memorial and then he will be buried next to his wife of 53 years in Borger, TX. The family asked that in lieu of flowers, donations be made to the Alzheimer’s Association, 921 W Eleventh St #1W, Traverse City, MI 49684 or to Brick Ways Foundation, 935 Barlow Street, Traverse City, MI 49686.

TRAVERSE CITY - Charles Robert Hale, 95, of Traverse City, MI, formerly of Borger, TX, died on January 9, 2021. Chuck was born in Dewey, Oklahoma on October 20, 1925. He was the son of the late Silas and Lillie Mae Hale. Chuck grew up in Dewey,... View Obituary & Service Information

The family of Charles Robert Hale created this Life Tributes page to make it easy to share your memories.