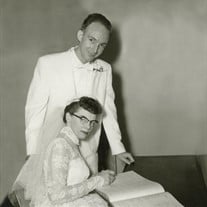 Charles Henry Fultz, 87, of Traverse City, died Monday, Nov. 23, 2015 in Mesa, Arizona. Chuck was born on Friday, May 18, 1928 to the late Royal and Sphiea (Elliot) Fultz in Detroit. He honorably served our country as a member of the U. S. Coast Guard from June 9, 1944 until Aug. 4, 1947. He married Jacqueline "Jackie" Robinson on Aug. 27, 1955 at St. Paul's Episcopal Church in Windsor, Ontario. Chuck was the president and owner of Fultz Manufacturing, Inc. on Park Drive in Traverse City. He enjoyed boating, woodworking, traveling and entertaining at his home on Duck Lake, and also enjoyed spending winters at Leisure World Resort in Mesa, Arizona. For many years, Chuck was a member of the Traverse City Puzzle Pack Hunt Club with his wife Jackie. Having a love for flying, Chuck became a pilot, receiving his private Pilots FAA License in November of 1968. Survivors include his niece, Mary Drake; and nephew, Francis Drake; a cousin, Larry Inman, of Traverse City; as well as members of Jackie's family, the Robinsons. He was preceded in death by his parents; sister, Sally Drake; and his wife, Jackie. Jacqueline "Jackie" Fultz, 78, passed away Wednesday, June 2, 2010, at home on Duck Lake. Jackie was born on May 8, 1932, in St. Thomas, Ontario, Canada, to the late Albert and Luella Robinson. During the war, the family moved to Windsor, Ontario, Canada, where she met Charles Henry Fultz of Detroit. After Jackie and Chuck were married, they moved to Traverse City, where Jackie was employed as a secretary for three different companies before joining her husband as secretary-treasurer for Fultz Manufacturing, Inc. Jackie's secretarial skills got her elected to a 40-year stint as historian of the Puzzle Pack Hunt Club of Traverse City. Her other major interest was the Traverse City Chapter of Quota International, where in 1991 she was honored as being the Quotarian of the Year for the local chapter, as well as for the entire District 20, which covers all of Michigan and part of Ontario. Jackie loved to cook, plan parties and work crossword puzzles. She avoided high places and boating with a passion, but would participate when necessary as the good sport that she was. Jackie is survived by her brothers, George (Violet) Robinson and Leslie Robinson, all of Windsor, Ontario; her nephews, Rick (Kathy) Robinson and David (Indy) Robinson; niece, Susan (David) Turner; great-nieces and nephews, Sean, Josh, Thomas, Karline, Madeline, Scott, Jack and Brady; as well as many other loving family members and friends. Jackie was preceded in death by her parents. A memorial graveside service honoring Chuck and Jackie will take place at 1 p.m. Saturday, June 18 at Grand Traverse Memorial Gardens, followed by a luncheon at The Elks Club. Memorial contributions in Chuck's memory may be directed to the Cherryland Humane Society. Memorial contributions for Jackie may be directed to Munson Hospice or to Quota International, PO Box 1733, Traverse City, MI 49685. You may share memories of Chuck and Jackie with their family by visiting www.reynolds-jonkhoff.com and entering Fultz in the search area.

Charles Henry Fultz, 87, of Traverse City, died Monday, Nov. 23, 2015 in Mesa, Arizona. Chuck was born on Friday, May 18, 1928 to the late Royal and Sphiea (Elliot) Fultz in Detroit. He honorably served our country as a member of the U. S. Coast... View Obituary & Service Information

The family of Charles & Jacqueline Fultz created this Life Tributes page to make it easy to share your memories.