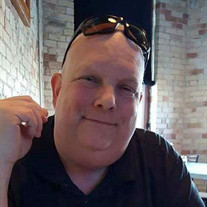 Charles ‘Charlie’ Andrew Jokinen, 48, of Traverse City passed away Sunday, October 16, 2016 at home surrounded by his loving wife, his children and his sister Robynne, after a courageous 9-1/2 year battle against Thymic Carcinoma. Charlie was born Friday, May 10, 1968 in Lindsay, ON to the late Robert and Marilyn ‘June’ (Abbott) Jokinen. He grew up in Bobcaygeon, ON with his older sister and 3 brothers. His dad was a pharmacist and the family lived above the pharmacy in a very small apartment that did not provide for much privacy. Being the second youngest Charlie often time was on the short end of being picked on, like the time that brother Chris threw a dart at Charlie. The dart stuck in the top of Charlie’s head and wiggled back and forth before it could be removed. The Jokinen’s were huge sports fans and he especially loved the Toronto Argonauts, the Toronto Blue Jays and Toronto Maple Leafs. Charlie’s love of football was evident during his high school years when he played football. He also played pick up hockey. In 2001, he joined an online chat room…a precursor to today’s online dating sites. He began to converse with a girl, Michelle, with whom he chatted faithfully for 1-1/2 years. They met a few times over the course of that time, but in early 2003 he moved to Traverse City and in May of 2003 he and Michelle were married in a service in Traverse City. Charlie planned a special service during their wedding vows where he also pledged his loved and commitment to Michelle’s two daughters, Jessica and Erica. For thirteen years he faithfully and lovingly kept his promise. Charlie will be remembered for his loving and kind spirit, his determination and a visible love in his eyes. He was a teddy bear with an enormous heart. He loved his family and especially loved Michelle, his daughters; Jessica and Erica, and his grandchildren. He was affectionately known as Charlie, Chuck and Chuckles. His warm and gracious smile would light up his face whenever a loved one called him by his nicknames. He was a gifted photographer. His talents allowed others to see the details and beauty of his subjects through his artistic eye. He inspired others to grab their camera and take photos, making permanent keepsakes of family events and capturing the beauty of nature. Charlie was also an accomplished chef. He had an extensive spice collection and was able to blend spices together making dishes that exploded with taste. He enjoyed cooking from recipes, but also was talented in cooking from scratch. Charlie is survived by his loving wife Michelle of Traverse City; daughters Jessica (Andrew Gary) Mack of Traverse City, Erica (Joshua Brown) Mack of Traverse City; sister Robynne (Randy) Pepper of Ontario; brothers Rick (Donna) Jokinen of Ontario, Michael (Nancy) Jokinen of Ontario, Chris (Jodi Lynn) Jokinen of Ontario; grandchildren Joshua, Abbygail, Daryn and Ella, numerous nieces and nephews; and Michelle’s parents Milton and Iva Lewis and Stan and Jacqie Delk. He was preceded in death by his parents Robert and Marilyn ‘June’ (Abbott) Jokinen. A visitation for friends and family will be held Friday, October 21, 2016 from 6 p.m. to 8 p.m. at the Reynolds-Jonkhoff Funeral Home. A memorial service will be held Saturday, October 22, 2016 at 11 a.m. at the Reynolds-Jonkhoff Funeral Home, with visitation beginning at 10 a.m. Mike Hill, a close personal friend, will officiate the service. Charlie was a faithful giver to those who were less fortunate and had an immense love for Christmas. Those wishing an expression of sympathy may direct gifts to Toys for Tots, c/o Maggie Kent, 147 East Tenth Street, Traverse City, MI 49684. Our beloved Charlie’s spirit is embodied in the following definition: Sisu – (noun) Extraordinary determination, courage and resoluteness in the face of extreme adversity. An action mindset which enables individuals to reach beyond their present limitations, take action against all odds and transform barriers into frontiers. An integral element of Finnish culture and also a universal capacity which we all share.

The family of Charles Andrew Jokinen created this Life Tributes page to make it easy to share your memories.