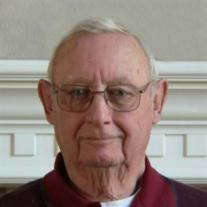 Charles T. “Bud” Mahn, 82, of Traverse City, went to be with the Lord on May 7, 2012, at the Pavilions. Born September 7, 1929, he was the son of Charles and Elsie Mahn. Bud lived his entire life in Traverse City, growing up on the family farm. In addition to farming chores, Bud found time to fish in Kid’s Creek, the Boardman River, and several lakes. Hunting for rabbits and deer also occupied his free time. After retirement Bud bought a fishing boat and spent many a day with friend Charlie Doe on Grand Traverse Bay trolling for trout and salmon. He also made several hunting trips with son Dave to Colorado, British Columbia, and Quebec, where he had a great time seeing new country. He loved to garden, whether it was growing fruit and vegetables on several acres for family and friends, or a few tomatoes for daughter Keri to can after he retired. Bud retired from Michigan Bell in 1987 after 35 years of service, where he made lots of friends, including Pat Stusik, who remained a close friend for many years. Bud never had a bad word to say about anyone. His cheerfulness and sense of humor made him special to all who knew him. He was passionate about sports, especially baseball and football, and was a huge fan of the Traverse City Trojans, all of the Detroit pro teams, and the Michigan Wolverines. He enjoyed spending time with his children and grandchildren. Some of his happiest times were spent watching them play sports. Bud is survived by his son, David (Linda Campbell) Mahn, of Austin, Texas; daughter, Vanessa (Jim) Evans, of Richmond, VA; daughter, Keri (David) Jacklin, of Glen Arbor; grandchildren, David, Ben, Josh, Joe, Sam, Ally, Christopher & Lauren. He is also survived by his sibling, Robert Mahn. He was preceded in death by a sister, Renata Hawkins. The family would like to give special thanks to the many fine caregivers at The Grand Traverse Pavilions, who took great care of Bud in his last years. The Funeral will take place on Friday, May 11, 2012 at 2pm with a visitation held one hour prior at the Reynolds-Jonkhoff Funeral Home. Burial will take place at the Grand Traverse Memorial Gardens. Please sign Bud’s online guestbook at www.reynolds-jonkhoff.com. The family is being served by the Reynolds-Jonkhoff Funeral Home.

Charles T. “Bud” Mahn, 82, of Traverse City, went to be with the Lord on May 7, 2012, at the Pavilions. Born September 7, 1929, he was the son of Charles and Elsie Mahn. Bud lived his entire life in Traverse City, growing up on the family... View Obituary & Service Information

The family of Charles T. Mahn created this Life Tributes page to make it easy to share your memories.