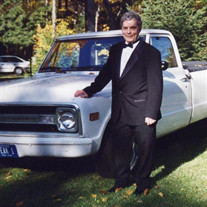 “Charly,” Charles Richard Peak of Bear Lake, passed away on Thursday, November 18, 2021. Charly was born in Chicago on December 26, 1938, the son of Alex and Hazel (Dietz) Peak. After graduating from Downers Grove High School in 1957 he embarked on following his true passion of working with wood and became a finish carpenter. Charly worked in the carpentry industry throughout his career in the Chicago suburban area, North Carolina, and Northern Michigan. He owned and ran his own carpentry business for many years. He took great pride in producing quality craftsmanship, refurbishing items and homes to their original state or creating new things with character. And everyone who knew Charly knew it had to be from “good wood.” Charly was a member of the United Brotherhood of Carpenters and Joiners of America Local 1461 and very proud to be an American. Charly loved old cars and trucks with loud engines, building, and the outdoors but he especially loved his dogs. He also enjoyed fishing, hunting, and many adventures with his “crew” on the boats he owned. In these last few months his greatest pleasure was simply being outside. His favorite places were Lake Michigan, Beaver Island, and anywhere he could catch the Blue Angels roaring overhead. His love of this area brought him and his wife Kay to move their family permanently to Northern Michigan, where Charly continued his carpentry business as well as opening a bed and breakfast, The Woodhow Lodge, in Northport with Kay. He spent his final years in Traverse City and then Bear Lake enjoying trips to the lake, a good drive, and being outside. Charly's mischievous grin, gruff voice, straightforwardness, and big heart will be greatly missed. He taught his family to get up early, to work hard but always take a midday break, to do quality work, to appreciate good old music and cars, and to be happy. He is survived by his “Sweetie” and wife of 53 years, Kay (Eichelberger); his children Camden (Jerry), Kirsten, Shawn (Shari), Kelly (Tom), and Erin (Mark); his grandchildren Becky (Alex), Allie (Ricky), Sam, Marcy (Zach), Sarah, Shane, Ryan, Tessa, and Erica (Cameron); and his great-grandchildren Alex, Jeanette, Vicky, Cece, Lily, Cris, Kenny, Kevin, Sebastian, Joey, Abbie, Alexa, Benjamin, Olive, and his namesake, Charly. He was preceded in death by his brother, Dale, both parents, and his beloved dogs, Roofus, Maude, Emma, Thelma and Stella. In lieu of flowers, the family asks that you consider making a donation to the Cherryland Humane Society in his honor or that you simply take a car ride, roll down the windows, turn up the bass, blast a Johnny Cash tune as loud as you can, and rev your engine. Charly would like that. A graveside service will be held at 1:00 p.m. on Wednesday, November 24, 2021 at the Leelanau Township Cemetery, Northport, Michigan.

&#8220;Charly,&#8221; Charles Richard Peak of Bear Lake, passed away on Thursday, November 18, 2021. Charly was born in Chicago on December 26, 1938, the son of Alex and Hazel (Dietz) Peak. After graduating from Downers Grove High School in... View Obituary & Service Information

The family of Charles Richard Peak created this Life Tributes page to make it easy to share your memories.