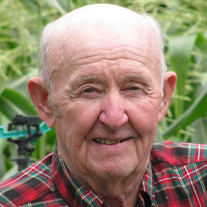 Charles Louis Verschaeve was born September 26, 1927 to Charles Verschaeve and Mary Verecke in Meade, MI and died of COVID 19 on October 19, 2020 in Traverse City, MI. He is survived by his loving wife of 72 years, Evelyn (LeBlanc) Verschaeve, and his children Rev. C. Michael Verschaeve, Christine Tarr (Gerard), Brian Verschaeve (the late Vicki), Yvonne Segal (Gerry), Suzanne Nixon, Anne Bilbrey (Clint), Charlene Verschaeve, Joseph (Elizabeth Chapelle) Verschaeve, 19 grandchildren, 25 great grandchildren, and several nieces and nephews. He is predeceased his parents, seven siblings and his son, Louis (Leslie) Verschaeve who died tragically in an ice fishing accident on Lake Huron in 2010. Charlie was raised on farms in Emmett and Fowlerville, MI, and the on east side of Detroit. At 17, he enlisted in the U.S. Navy and served as a Fireman 2nd Class on LCI-482 (Landing Craft Infantry) in the South Pacific during the closing days of World War II. Following the war, he married Evelyn and during their marriage they took care of their aging mothers in addition to raising their growing family. Together they constructed five family homes located in Macomb County, Lake Orion and lastly in Maple City fulfilling Charlie’s dream of settling the family on a farm in the rolling hills of Leelanau County. Charlie was employed by Ford Motor Company for 30 years as a boiler operator, machinist, and refrigeration specialist. During 43 years of retirement, he was an award-winning gardener specializing in onions, Tree Farmer of the Year 1979, Leelanau County Soil Conservation District, producing veneer quality hardwood maple. He was an adorer of little babies, a hunter, fisherman, fieldstone mason, pinocle and euchre player, baker of Belgian raisin bread, lover of dogs and a consummate storyteller. Charlie was truly a jack of all trades. He served for a time on the Kasson Township Board of Review, on the St. Rita/St. Joseph Parish Council and as an Eucharist Minister to Munson Hospital. For 25 years, Charlie and Evelyn enjoyed wintering in Gulf Shores, Alabama and Clearwater, Florida. A private Memorial Mass will be celebrated at St. Francis Church, Traverse City. Memorial contributions in Charlie’s memory can be made to the charity of one’s choice.

Charles Louis Verschaeve was born September 26, 1927 to Charles Verschaeve and Mary Verecke in Meade, MI and died of COVID 19 on October 19, 2020 in Traverse City, MI. He is survived by his loving wife of 72 years, Evelyn (LeBlanc) Verschaeve,... View Obituary & Service Information

The family of Charles Louis Verschaeve created this Life Tributes page to make it easy to share your memories.