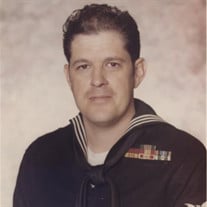 Charles Reed Wassom (Charlie) passed away peacefully and quietly in his sleep on September 3, 2016. He was born May 24, 1939 in Paris, Kentucky. He served in the United States Navy for 23 years and completed three tours of duty in the Vietnam War. After retiring from the Navy, he worked as an electrician for General Motors in Lansing for 26 years before retiring in 2006. He is now reunited with his beloved wife Theodora (Teddy) of 50 years, who passed away on March 18, 2016. Charlie was a quiet and gentle soul who wanted nothing more than for his wife and children to be happy. He was a brilliant man who could finish a New York Times crossword puzzle in record time and did calculus for fun. He was a talented musician and spent many hours in his music room with his large collection of guitars, banjos, mandolins, and ukuleles. He was very soft spoken, but everything he said was wise, hilarious, or both. He was immensely proud of his wife, children and grandchildren, and we all admired and loved him dearly. Charlie is survived by two sons and a daughter; Darrin (Rhonda) Wassom, Kevin (Karen Armstrong) Wassom and Tracie (Brian) Shindorf. Also surviving are seven grandchildren; Alex Wassom, Abbey Wassom, Audrey Wassom, Ashley Martinez, Ellie Dinehart, Rylie Dinehart and Dawson Shindorf, a great-granddaughter, Willow Switzer as well as two sisters; Miriam Heflin and Barbara Smith. He was preceded in death by his wife, Teddy, his parents, James and Edith Wassom, also three brothers and three sisters; Perry Wassom, Frank Wassom, Clyde Wassom, Annabelle Stewart, Mary Louise Wassom and Shirley Smith. In accordance with Charlie’s wishes cremation has taken place. Interment of both Charles and Theodora will take place at a later date in Fort Custer National Cemetery in Battle Creek, Michigan. In lieu of flowers, those planning an expression of sympathy may wish to consider a memorial donation to the Silver Muzzle Cottage, 201 EC Loomis Industrial Park Dr., Elk Rapids, MI 49629, http://campbowsers.com/silver-muzzle-cottage/ or Mid Michigan Cat Rescue, 1117 Tulip St., Grand Ledge, MI 48837, http://midmichigancatrescue.org/. Please feel free to share your thoughts and memories with Charlie’s family at www.reynolds-jonkhoff.com. The family is being cared for by the Reynolds-Jonkhoff Funeral Home and Cremations Services.

Charles Reed Wassom (Charlie) passed away peacefully and quietly in his sleep on September 3, 2016. He was born May 24, 1939 in Paris, Kentucky. He served in the United States Navy for 23 years and completed three tours of duty in the Vietnam... View Obituary & Service Information

The family of Charles Reed Wassom created this Life Tributes page to make it easy to share your memories.