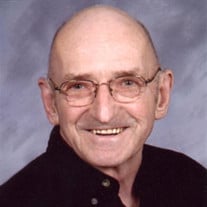 Charles C. Webber, 84, of Traverse City, formerly of Houghton Lake and Green Valley, AZ passed away peacefully on Thursday, October 24, 2019 at Munson Medical Center. Charlie was born on January 7, 1935 in Highland Park, MI to the late Charles and Myrtle (Miller) Webber. He lived in Dearborn and Allen Park for many years. He married the love of his life, Joyce, on July 11, 1980. Charlie was employed for several years with First Federal Savings and Loan in the Detroit area, before moving to Houghton Lake in the 1970’s. He then worked for Roscommon State Bank, which later became NBD Bank, as an Associate Vice President. He retired from the bank in 1990 after over 30 years of service. He then owned Charlie’s Tool Crib in Houghton Lake until 1997. He was a member of the Houghton Lake Merchant’s Association, the Rotary Club and the Houghton-Higgins Elks Lodge #1982. Charlie and Joyce moved to Green Valley, AZ where they lived and made many great friends, for 20 years, returning to Michigan in 2017. Charlie’s faith was very important, he was an active member of Houghton Lake United Methodist Church, then Green Valley United Methodist Church and later Central United Methodist Church in Traverse City. Charles is survived by his loving wife of 39 years, Joyce, two sons and a daughter; Steve (Barb) Webber, Jim (Terry) Webber and Laurie (Joe) Chudzinski. Also surviving are step-children; Randy (Heather) Stuck, April (David) Mertz, Scott (Barb) Stuck, as well as 11 grandchildren and seven great-grandchildren. He was preceded in death by a sister, Paula K. Bryant. In accordance with Charles’ wishes cremation has taken place and a private family service will be held at a later date. Those planning an expression of sympathy may wish to consider a memorial donation to the Alzheimer’s Association-Greater Michigan Chapter, 921 W. Eleventh St. #1W, Traverse City, MI 49684 or to Central United Methodist Church, Mission Fund, 222 Cass St, Traverse City, MI 49684. Please feel free to share your thoughts and memories with Charlie’s family at his tribute page at www.reynolds-jonkhoff.com. The family is being cared for by the Reynolds-Jonkhoff Funeral Home and Cremation Services.

The family of Charles C. Webber created this Life Tributes page to make it easy to share your memories.