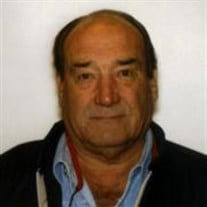 Charles “Charlie” Arthur Weitschat, 76, of Suttons Bay passed away May 7, 2016 at his home surrounded by his loving wife, Sally, and his family. Charlie was born on February 25, 1940 in Detroit, MI to the late Arthur and Hilda (Purdy) Weitschat. After high school, Charlie enlisted in the United States Navy and served aboard the aircraft carrier USS Intrepid. Charlie was a Patriot. As a daily tribute to the love of his flag and country, Charlie would raise the flag at dawn and lower it at dusk. After his military service, Charlie worked at General Motors for some time. The auto industry was not for Charlie. He was a funny and engaging person who could strike a conversation with anyone. Described as a simple, yet complex person, even a short conversation would leave the person remarking at how impactful the encounter was. He purchased a grocery store in Wilmot, MI and spent many years as a grocer. A trip to the store would almost certainly include time spent talking with Charlie. He was loving and compassionate with his friends and customers, but his true love was his family and Sally. In his spare time, he enjoyed playing his favorite game dominos with family and friends, pool, reading, playing card games and attending bbq parties. He is survived by his wife, Sally of Suttons Bay; daughters Lisa (Scott) Otto of Houston, TX, Sarah Ward of Elk Rapids; sons Mike (Chris) Weitschat of Elk Rapids, Chuck Weitschat of Marquette; step-sons Tom Fleury of East Lansing and Brad (Sara) Fleury of Indianapolis, IN; grandchildren Riley Weitschat, Taryn Otto, Jack Otto, Ava Otto, Ellie Ward, Charlie Ward, Max Ward, and Kendal Fleury. He is also survived by his sister Elise McGraw of Ventura, California and Susan Schauer of Shelbyville, Michigan. He was preceded in death by his parents. The family will hold private services at a later date. In memory of Charlie, the family requests that memorial donations be directed to the Michael E. DeBakey VA Medical Center Veterans Affairs Voluntary Service (OOX)-D, 2002 Holcombe Blvd, Houston, TX 77030 . Or to the Family Motorcoach Association (Medevac Unit), 8291 Clough Pike, Cincinatti, OH, 45244-2796 or www.fmca.com. Please share your thoughts and memories of Charlie by way of his online guestbook at www.reynolds-jonkhoff.com. The family is being cared for by the Reynolds-Jonkhoff Funeral Home and Cremation Service.

The family of Charles Arthur Weitschat created this Life Tributes page to make it easy to share your memories.