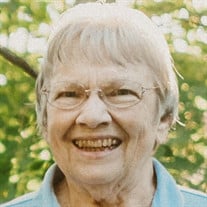 Charlotte “Char” Louise Owen, 79 of Traverse City passed away peacefully on January 8, 2021 at Munson Hospice House. Char was born on May 3, 1941 in Three Rivers, MI to the late Robert and Dorothy (Tallman) Millard. She grew up in the town of Mendon, MI and later attended Albion College. In 1976, Char relocated from Sturgis, MI to Traverse City with her 3-year-old son Tom. She was determined and courageous in establishing a new career in banking, building a house where Tom would grow up and settling into the community. Char retired from Traverse City State Bank, having worked through multiple mergers in the banking industry and many changes in her responsibilities as her career developed. One of the roles she enjoyed the most was that of Teller Instructor. She was selected to develop the first full-time training program for tellers because of her knowledge, deep attention to detail and a professional demeanor that created a memorable customer experience time and again. Char made lifelong friendships over her years in banking and many former colleagues in this community still comment on how significantly she influenced their careers. Her life centered around Tom and she immersed herself in the things that interested him the most. From attending every soccer game to watching football, Char was able to have lengthy conversations about any sport! Some of their best memories include spending weekends and summers with family at the homestead in Mendon, playing in the backyard pool, eating fresh raspberries from the garden and spending endless hours laughing together. Early in life, Char acquired her mother’s talent for sewing and became a versatile and masterful seamstress. Later in life she turned her talent to making quilts. She had a flair for big, bold colors and patterns that stunned the eye and brought life and energy to any place her quilts were displayed. Every year she spent two weeks on Beaver Island with her sister and their childhood best friends - creating, quilting and soaking in the nature and camaraderie. In the last two years, Char brought her love of cats and quilts together, making and donating cat quilts to the Cherryland Humane Society. While Tom was always the apple of Char’s eye, he had to share the stage when his daughter Ireland was born six years ago. Char and Ireland had a very special bond and every other Friday, Ireland would look forward to spending the day playing and reading with “Mema Char”. During retirement, Char practiced Tai Chi where she enjoyed the energy and motivation it gave her. She became friends with a small group of devoted members. Colleagues, friends and acquaintances would comment on Char’s unforgettable smile and sunny disposition. Fondly, Char will be remembered as an amazing quilter, cat lover, loving sister, devoted friend, awesome mother and an even better grandmother. Surviving Char is her son Tom (Shannon), granddaughter Ireland, siblings Laureen (Jim) Searing of Saugatuck, Rodney (Eve) Millard of Sturgis and many other family members and friends. Char is proceeded in death by her parents. Private family service will take place on Wednesday, January 13th at the Reynolds-Jonkhoff Funeral Home. Grand Traverse Memorial Gardens will serve as her final resting place. Due to COVID-19 a Celebration of Char’s life will take place in the spring. Memorial Contributions in her honor may be directed to the Cherryland Humane Society. Kindly share thoughts and memories with Char’s family at www.reynolds-jonkhoff.com.

Charlotte &#8220;Char&#8221; Louise Owen, 79 of Traverse City passed away peacefully on January 8, 2021 at Munson Hospice House. Char was born on May 3, 1941 in Three Rivers, MI to the late Robert and Dorothy (Tallman) Millard. She grew up... View Obituary & Service Information

The family of Charlotte "Char" Louise Owen created this Life Tributes page to make it easy to share your memories.