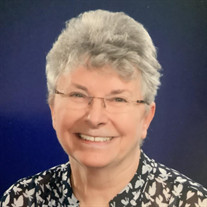 Charlotte “Char” Crosby, 81, of Traverse City, passed away March 24, 2021. Char, an only child was born to the late Charles and Rose (Dvorak) Jonas on January 23, 1940 in Pocatello, ID. On June 3, 1961, Char married the man of her dreams, Robert “Bob” Crosby at Blessed Sacrament Church in Lincoln, Nebraska. Together, bonded by their faith and love, they had four beautiful daughters; Molly, Ann, Kathy and Jackie. Char was an amazing nurse from 1960 until her retirement in Traverse City. Char has lived in the Traverse City area since 1994 after moving from Wheaton, Il. Previous to Illinois, Overland Park, Kansas was where they called home for 10 years. She was a loyal member to St. Patrick’s Catholic Church for many years and then became a member at St. Francis Catholic Church. Faith and family were most important to Char, although she found great joy in quilting, baking and gardening. She was a member of the Rumpled Quilts Kin Quilting and founded Common Threads Quilters. She also enjoyed her regular walks with her husband making sure to wear her Fit-Bit so she could always count her steps. Char is survived and greatly missed by her husband Bob, her children; Molly (Steve) Pellettiere, Ann Crosby, Kathy (Kevin) White, and Jackie Crosby. Not only was she a loving wife and mother, but a fantastic grandmother to; Vincent, Dominic, Joe, Ethan, Britain, Brandy, Shannon, Robert and Randy. And also a proud great grandmother of 7. She is preceded in death by her parents. Visitation will take place on Tuesday April 6, 2021 from 5-7pm at the Reynolds Jonkhoff Funeral Home. The rosary will be prayed at 7pm. Due to current restrictions, please be cognizant of your time visiting with the family so they may greet all friends. A Memorial Mass will take place on Wednesday April 7, 2021, 11 am, at St. Francis Catholic Church. Char’s final resting place will be Oakwood Catholic Cemetery. Those wishing an expression of sympathy may wish to contribute to St. Francis of Assisi Catholic Church, Traverse City, in Char’s honor. Char and her family are being cared for by the Reynolds Jonkhoff Funeral Home and Cremation Services.

The family of Charlotte "Char" Crosby created this Life Tributes page to make it easy to share your memories.