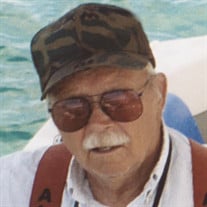 Chester A. Middleton, 89, of Traverse City, formerly of Port Huron, MI, entered into eternal life on Sunday, 24 May 2015. Chester was born on 18 August 1925, in Detroit, MI, to the late Maude and Harold Middleton. Chester attended Detroit Cass Tech High School, and on his 17th birthday, entered the US Navy, at Detroit. He served during WWII seeing action in the North African campaign and Pacific Theater of war. He fought in several major battles including Iwo Jima, Peleliu, and Okinawa. He returned home after the war and spent 42 years working at The Budd Co., in Detroit, as a journeyman machine repairman. Chester married Patricia Blizzard Patzke in March 1963. Chester was an avid outdoorsman who loved hunting, most especially archery deer hunting, in his retirement. He deer hunted the Hudson Creek Swamp in Roscommon County, for 55 consecutive years. He also loved snowmobiling and spent many winters riding his beloved Polaris snowmobiles. In retirement, he and Patricia traveled extensively in their motor home, visiting nearly every US state and much of Canada. Chester is survived by his wife, Patricia, of Traverse City, his children-Patricia Boldizsar of Port Huron; Bill (Pam) Middleton of Grayling; Debbie (Larry) McMaster of Port Austin; Toni (Dean) Williams of Grand Haven; and Chris (MaryLou) Middleton, of Traverse City; nine grandchildren, and five great-grandchildren. Chester was preceded in death by his daughter, Leslie Coulston, and his siblings, Juanita, Nelson, Gordon and Alice. A visitation will take place on 29 May 2015, from 5 p.m. to 8 p.m., at Reynolds-Jonkhoff Funeral Home in Traverse City. Cremation will follow. A memorial service will take place on 27 June 2015, 11:00AM, at Faith Lutheran Church, in Port Huron, MI. A luncheon at the church will immediately follow. The family is being served by the Reynolds-Jonkhoff Funeral Home and Cremation Services.

Chester A. Middleton, 89, of Traverse City, formerly of Port Huron, MI, entered into eternal life on Sunday, 24 May 2015. Chester was born on 18 August 1925, in Detroit, MI, to the late Maude and Harold Middleton. Chester attended Detroit... View Obituary & Service Information

The family of Chester Alton Middleton created this Life Tributes page to make it easy to share your memories.

Chester A. Middleton, 89, of Traverse City, formerly of Port...